The 2014 Incheon Asian Games team bronze medallist began the final with a 10.5 and followed that up with a 10.3. 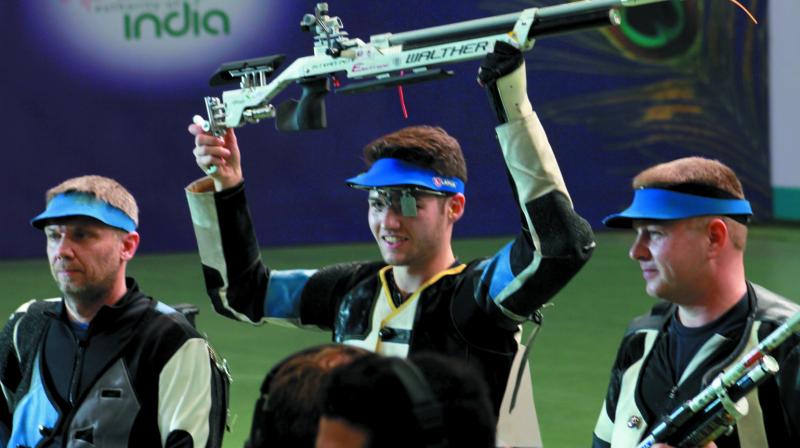 New Delhi: In what was a disappointing day for the hosts, Ravi Kumar finished at the bottom of the heap in a high-scoring 10m air rifle final as India’s medal count remained static at one gold in the ISSF World Cup Finals here on Wednesday.

Competing in the maiden World Cup Final, Kumar shot 123.4 in the eighth-man event before becoming the first to be eliminated in the third series on the second day of the competition.

On Tuesday, Jitu Rai and Heena Sidhu had combined to give India the gold in 10m mixed air pistol event at the Dr Karni Singh shooting ranges here.

With 623.9, Kumar managed a fifth-place finish in the qualification.

The 2014 Incheon Asian Games team bronze medallist began the final with a 10.5 and followed that up with a 10.3.

A 10.2 in the third shot of the first series kept him in fray, but a 9.2 in the following shot pulled him to the last place, from where he could never stage a fight back. He produced quite a few high 10s in the next two series, including a 10.8 and two 10.6s, but they were not enough to see him through to a better finish.

The 20-year-old Istvan Peni of Hungary clinched the gold medal with 249.8, equalling the junior world record in the process, while Belarus’ Vitali Bubnovich took the silver with 249.5.

Peter Sidi, a Hungarian shooting legend, bagged the bronze — his seventh air rifle medal in the World Cup Final — with 228.5.

Serbia’s Milutin Stefanovic finished fourth with 207.6. In the day’s other event, France’s Celine Goberville bagged the gold in the women’s 10m air pistol with 240.9. Yuemei Lin of China (237) had the silver ahead of countrymate and reigning Olympic champion Mengxue Zhang (218.7).