Patna Pirates forced a super tackle and then scored with a two-point raid to minimise the lead. 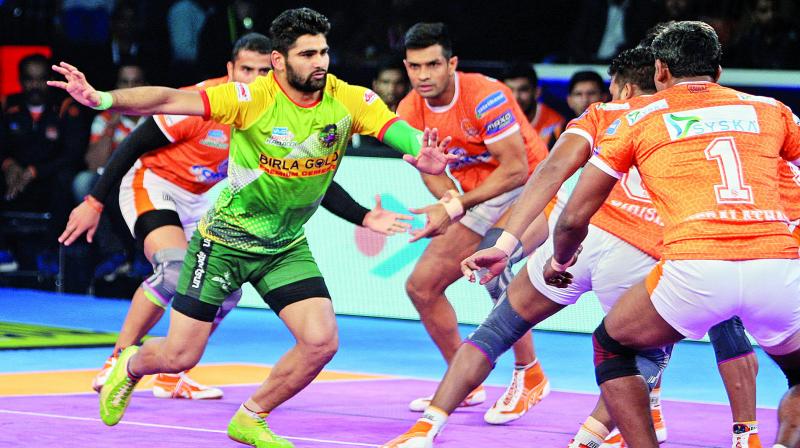 Patna Pirates scored 18 points in the last six minutes to record a stunning 42-32 victory over Puneri Paltan in the third eliminator of Pro Kabaddi Season 5 on Tuesday. Pardeep Narwal scored 19 points to lead his team to victory. Patna Pirates will now play Bengal Warriors on Thursday for a place in the final against Gujarat Fortunegiants.

Puneri Paltan crumbled under pressure and lost their nerve as their campaign came to a disappointing end. Deepak Niwas Hooda scored nine points but could not deliver when it mattered the most for his team.

Puneri Paltan ended the first half strogly as they inflicted an all out in the 19th minute and later went into the break leading 20-13.

Patna Pirates’ defence had a half to forget as they scored just one point in the first half. Pardeep Narwal scored 10 raid points in the first half, whereas Hooda got nine for Puneri Paltan.

The game was slipping from Patna’s hands as the Puneri Paltan defence kept Narwal and Monu Goyat out of the match for long periods of the second half. Puneri Paltan led 28-18 in the 32nd minute and were on the verge of inflicting another all out.

Patna Pirates forced a super tackle and then scored with a two-point raid to minimise the lead.

Pirates inflicted an all out in the 36th minute to lead for the first time 31-30.

Patna Pirates sent back Deepak Narwal and scored with a do-or- die-raid as Pirates led 35-32 in the 39th minute. They inflicted an all out in the 40th minute as Pirates won 42-32.