India has low expectations at the World Athletics Championships

It is difficult to predict who will reach the final though the AFI is pinning its hopes in the three 4x400m relays. 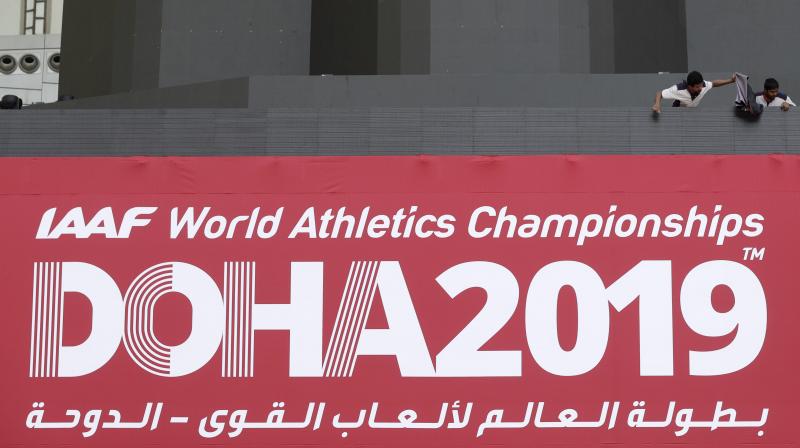 Medal is too far-fetched a thought and even hopes of making the finals seem barely believable as India enters the World Athletics Championship without two of their biggest stars -- the injured Neeraj Chopra and Hima Das. (Photo: AP)

Doha: Medal is too far-fetched a thought and even hopes of making the finals seem barely believable as India enters the World Athletics Championship without two of their biggest stars -- the injured Neeraj Chopra and Hima Das.

The championship starts from Friday.

World-class javelin thrower Neeraj is not taking part in the September 27 to October 6 showpiece as he has been doing light training since May, having undergone elbow surgery.

Another bright prospect, Hima, trained in Europe for nearly four months, winning some low-level races before pulling out due to a lower back injury after being named in the initial team.

The Athletics Federation of India (AFI) received a lot of flak for her injury management.

A fit Neeraj (who also qualified for the Worlds) would have at least given some hope, but Hima was never in the scene in her pet 400m event, finishing outside her personal best of 50.79 -- which she clocked during the Asian Games last year -- in the seven races and two in last two months.

It is difficult to predict who among the Indians will reach the final though the AFI is pinning its hopes in the three 4x400m relays, particularly the mixed 4x400m which is making a debut in the World Championships.

A medal though will be out of bounds and Anju Bobby George's 2003 Worlds long jump bronze will remain the lone success.

In the last edition in London in 2017, only one Indian made it to the finals (Davinder Singh Kang in men's javelin) while the race walkers and marathoners produced disappointing performances.

Of the 27-member Indian team, 13 have been named for the relays, though Dharun Ayyasamy will also run in the individual 400m hurdles.

National record holder Muhammed Anas has not been fielded in the individual 400m though he had breached the World Championships qualification mark, in order to boost the men's 4x400m relay team's chances of making the finals.

The top eight finishes in all the relays will book a spot in the 2020 Tokyo Olympics, something India is aiming for.

Hima was initially named in the team to boost India's chances in the women's 4x400m and mixed 4x400m (India won gold in both in Asian Games but after the disqualification of Bahrain in case of a mixed relay), but deputy national chief coach Radhakrishnan Nair still feels the country can reach the mixed 4x400m finals.

"Not much difference (with Hima's pulling out). We have to be positive and (I) still believe that we can reach the finals in mixed 4x400m relay," Nair said.

Among other athletes, young long jumper M Sreeshankar, metric mile runner Jinson Johnson and shot putter Tejinder Pal Singh Toor will have to better than their best if they want to reach the finals, while the likes of sprinter Dutee Chand will hope to reach the 100m semifinals.

Sreeshankar will start India's campaign in the qualification round of the men's long jump on an opening day on Friday.

The automatic qualification mark for the finals has been set at 8.15m, though jumpers below this mark can also advance if enough athletes do not cross the cut-off distance to make the 12 finalists.

The 20-year-old Kerala athlete has gone beyond 8.15m just once in his career -- an 8.20m last year in the National Open -- though officials described it as a freak jump. He has a best of 8.00m this year and that has placed him second last in terms of the season's best among the 27 jumpers who will start the qualification round.

Later in the day, Ayyasamy and M P Jabir will run in the men's 400m hurdles heats. With 48.80m as his season's best, Ayyasamy, who recently recovered from an injury, has a better chance of making it to the semifinals from heat number 5 than Jabir, who will run earlier in the first heat.

The first four in each of the five heats and the next four fastest will qualify for the semifinals.