Vihari and Prasad congratulate Sindhu on her acheivement

The gold was Sindhu's fifth medal at the World Championships. She won a bronze each in the 2013 and 2014 editions. 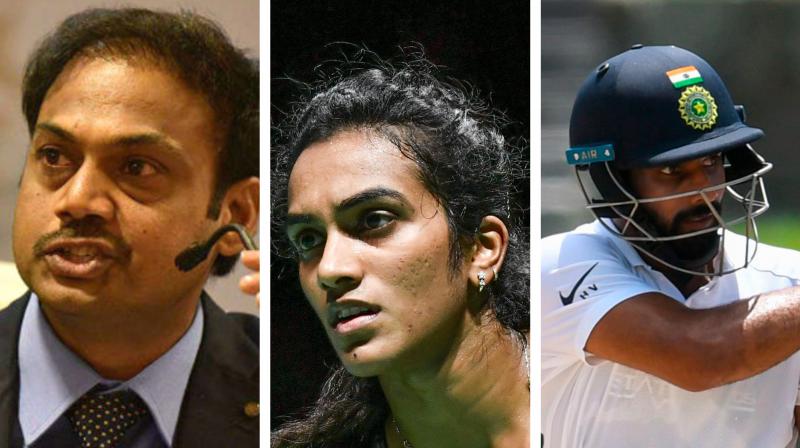 Two-time silver medallist Sindhu became the first Indian to win the World Championships gold by thrashing familiar rival Nozomi Okuhara of Japan 21-7 21-7 in one of the most lopsided finals ever at Basel, Switzerland on Sunday.

"Great achievement for Indian sports and I would like to congratulate her on this special day and we as Indians are proud of her," said Hanuma, who scored 93 in the second innings against the West Indies to play a crucial role in India's 318-run win in the World Championship campaign opener at Antigua.

"I hope she goes onto achieve many more laurels for the country in future," Vihari added.

The gold was Sindhu's fifth medal at the World Championships. She won a bronze each in the 2013 and 2014 editions.

Sindhu is now the joint highest medal-winner in women's singles in the World Championships history with former Olympic champion Zhang Ning of China, who won an identical 1 gold, 2 silver and 2 bronze between 2001 and 2007.

B Sai Praneeth also broke a 36-year long wait, becoming the first Indian male shuttle to win a medal at the World Championship. He won a bronze medal, emulating Prakash Padukone who had achieved the feat in 1983.

"Many many congratulations to PV Sindhu for winning the World Championship. This is a testimony for her hard work, commitment & Skills. Can't ask anything better from her. Whole country is proud of her," he said.

"I would also like to appreciate Pullela Gopichand who has been the backbone of Indian Badminton. I personally know him and I have never seen anyone who is as committed as him. Hats off to Sindhu & Sai Praneeth and their Guru Gopichand."

"Sindhu has shown imperious performances as she defeated proven champions on course to her medal," he said.

"Credit to National Coach Gopichand and Foreign Coach Kim Ji Gung for their relentless efforts, also not to forget the way Sai Praneeth played to win a bronze medal.

"I would like to congratulate both the shuttlers as such performances are true inspirations for the upcoming players."