U Mumba ready for Pune challenge

Coach Sanjeev Kumar admits defense falure in the last game but vows to do well after learning from mistakes. 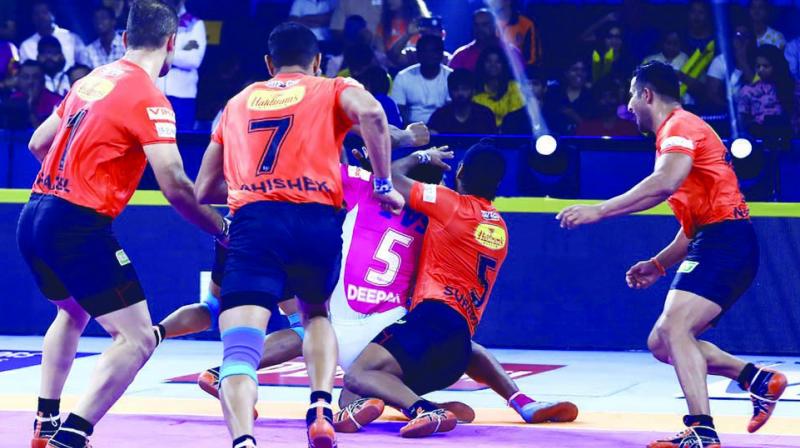 After a good start to their Pro Kabaddi League season 7 against hosts Telugu Titans, U Mumba had a disappointing outing in the second game. They went down tamely by 23-42 to Jaipur Pink Panthers in Hyderabad.

Defense regarded as their strong point, scored just five tackle points collectively in the entire match. Coach Sanjeev Kumar Balyan admitted their defense flopped completely against Panthers but vowed to come back strong against Puneri Paltan in the Maharashtra derby clash on Saturday.

“We did well in the first game but our defense didn’t click in the second game. All the four defenders failed,” Balyan said about the solid defense led by Iranian Fazel Atrachali and experienced allrounder Sandeep Narwal.

“All matches are same for us. We have identified some shortcomings and some mistakes we committed. We have worked on those and will try to rectify the mistakes and do well,” he added in an interaction here on Thursday.

Paltan have Anup Kumar as coach who was with U Mumba for first five seasons and led the side also. Kumar knows the Mumbai franchise in an out and may accordingly plot his former team’s downfall. But U Mumba assistant coach Upendra Kumar felt more pressure would be on Anup than the home team.

Last season the two sides produced cracking three games with first resulting in a tie, second going to Pune courtesy one point lead and third U Mumba had it in its grasp relatively easily.

Balyan made it clear that their team isn’t only about defense and they are focusing on the attacking play as well. “Our focus is on raiders as well. Abhishek Singh is doing well. Rohit Balyan also played well and Athul MS is good raider. We also have Dong Geon Lee (Korean Raider). All have to work together for the team,” Balyan said.

Starting Saturday, U Mumba will play four matches at Dome NSCI over the next week. After a much-awaited clash against Paltan they will face off against Bengaluru Bulls on Sunday. After a two-day break they will meet UP Yoddha on Wednesday and Gujarat Fortunegiants on Friday.