Oltmans & Co. have lot to answer

Former coach Jagbir Singh says India are unable to compete under pressure. “It has a lot of to do with mental toughness. 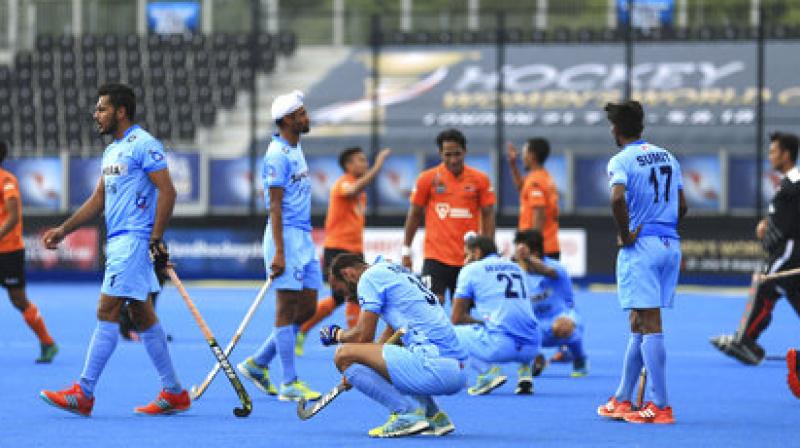 India lost 2-3 to world no. 11 Canada to finish overall sixth in the HWL Semi-final in London. (Photo: AP)

New Delhi: Consider these figures. Fourty seven circle entries, 17 shots at goal, eight penalty corners and 54 per cent possession in the opponents’ half.

These were India’s match statistics against world no. 11 Canada in the 5th-place playoff in the World Hockey League Semi-Final in London on Sunday and yet they ended up losing. The scoreline was 2-3, with Canada pulling off a major upset and with it, earning a place in the 2018 World Cup in Bhubaneswar.

Twice in a week, India have lost to teams ranked below them and the manner of defeats has been baffling. Clueless on most occasions, no game plan or structure and extremely fragile when under pressure… this has been India’s story — barring the two big-margin wins over Pakistan, who are undergoing their lowest phase owing to lack of international matches and internal politics — in the 10-nation tournament. They finished a lowly sixth behind Canada and Malaysia (ranked 14th).

If coach Roelant Oltmans was trying to finalise his core group and put in place a system of play for the Olympic cycle leading up to the 2020 Tokyo Games, he has some soul searching to do.

The HWL Semi-Final — a World Cup qualifier — has raised more questions than answers for the Dutchman.

On the day, Oltmans said the “attitude of his players was not at the required level,” raising questions about their focus.

One could argue that India were under no pressure having already qualified for next year’s showpiece event as the hosts, but their abject surrender to Canada and Malaysia underlined shortcomings and inability to perform when it matters.

Oltmans said on Sunday, “Canada had to win to qualify. We had already qualified. I think the attitude of the players was not at the required level. After beating Pakistan everyone thinks that is the only important game... That is bull****, because Pakistan at this moment is not the team that you have to beat. You have to beat Malaysia, Canada and England.”

Oltmans knows that there are sterner tests ahead — India play the Asia Cup in October followed by the World League Final at home in December — but if the past week’s results are to go by, these aren’t the best of times in Indian hockey.

Former coach Jagbir Singh says India are unable to compete under pressure. “It has a lot of to do with mental toughness. Whenever there is a deciding match, our players are unable to play well.

“We cannot take our places for granted just because we are privileged to get so many tournaments at home and do not need to qualify. Losses to Malaysia and Canada are unacceptable and the players and management will have to share the blame,” says the former Olympian.

Jagbir also questioned the players’ focus. “There is no dearth of talent in these boys, but are they focused? The trapping and basics are also sometimes erratic. Look at penalty corner conversions.

“We are world no. 6, and there is talk of finishing on podiums now. Was this a performance of a team wanting to win medals at a World Cup? A lot of questions have to be answered on an urgent basis. The implementation is too weak and the think-tank too needs to do a lot more.”