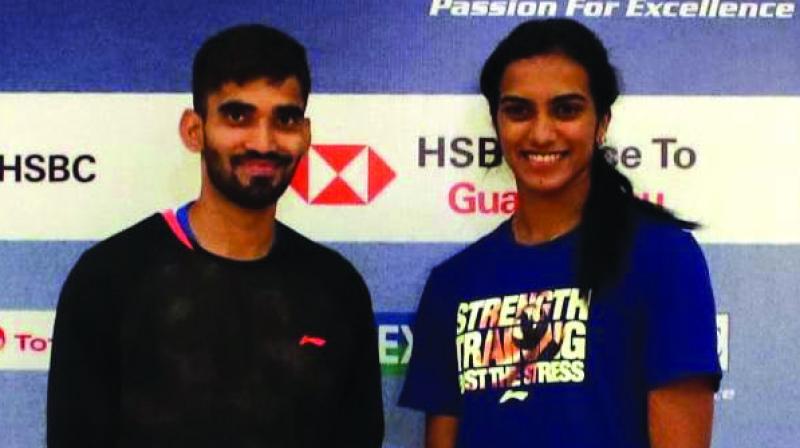 Kidambi Srikanth and P.V. Sindhu will be the top seeds amongst Indians at the Indian Open.

New Delhi: Former champions P.V. Sindhu and Kidambi Srikanth will look to shrug off their erratic form and ensure an Indian sweep at the $350,000 India Open, which is shorn of star power this time.

With Saina Nehwal pulling out of the country’s blue-riband tournament after failing to recover from acute gastroenteritis, the onus will be on Sindhu and Srikanth to keep the tricolour flying at the business end of the tournament starting on Tuesday.

Olympic silver-medallist Sindhu, who claimed the World Tour Finals in December last year, will be the firm favourite to secure the women’s title after receiving the top billing following the pullout of Chinese top seed and reigning All England champion Chen Yufei due to medical reasons.

The absence of Japanese players will also help Sindhu’s case. Sindhu had a decent start to the new season with a quarterfinal finish at the Indonesia Masters but a first-round exit at the prestigious All England Championship came as a major jolt.

The Indian ace, who took silver medals at the Commonwealth Games, Asian Games and the World Championship in 2018, will draw inspiration from her performance in the last two editions where she had reached the finals and claimed the title in 2017.

Sindhu will open against compatriot Mugdha Agrey and is expected to face fast-rising Danish Mia Blichfeldt, seeded eighth, in the quarterfinals. A win is likely to pit her against Chinese third seed He Bingjiao.

With defending champion and top seed Shi Yuqi pulling out, Srikanth will be at the forefront along with former world champion Viktor Axelsen, who had claimed the title in 2017 after three back-to-back finals. Srikanth, who clinched the title in 2015, will begin his campaign against familiar foe, Hong Kong’s Wong Wing Ki Vincent, and might come across fellow Indians Sameer Verma or B. Sai Praneeth later as both are in the same half of the draw.