‘Indian runners have potential, but need time and guidance’

US Olympian Janet Cherobon-Bawcom was in Pune for a while to motivate the Indian runners. 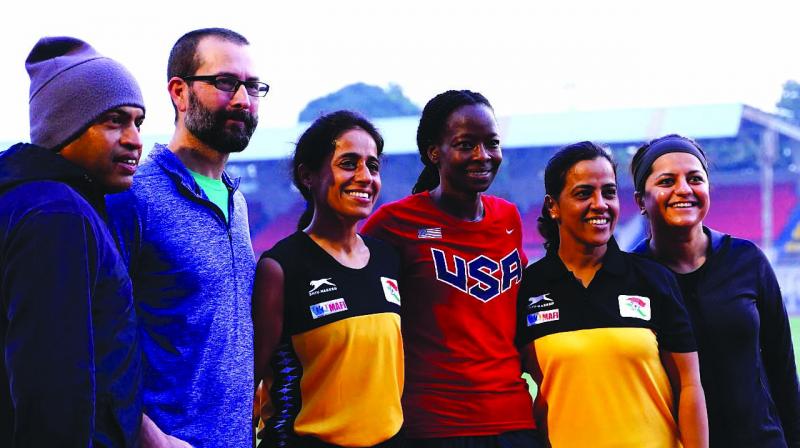 US Olympian Janet Cherobon-Bawcom was in Pune for a while to motivate the Indian runners and kickstart her Olympic trial preparation for the Tokyo Games next year.

The face of the recent Pune Half Marathon Janet also conducted track sessions to inspire youngsters and discussed the broader aspects of training and nutrition. She emphasised that India has good potential, but runners need time and guidance to pursue running.

Q. You have come to India as the event Ambassador of Pune Half Marathon? How did this association come into being?
My husband Jay had come to know some of the races leadership through his coaching services.  He knew this was a new event that was doing a great job and suggested that it would be a good opportunity to support the growth of running in India as well as having an awesome experience on my first visit to India, so we decided to lend our support to the event.

Q. You have been in India, specifically Pune, since the past week. What all have you done other than taking part in the sessions for aspirational runners? Anything that you really liked about the city?
I have visited some cultural sites such as the forts
and museums, which is
really interesting. Also, the food has been a real highlight, so I’m enjoying going with new friends to their favourite places to try new foods!

Q. Coming to your life, it has been full of surprises. Starting from Kenya to ending up in USA and finally representing US at the Olympics. Can you shed some light on your journey?
It has been a series of surprises for sure. When I took up running, my sole objective was to get access to an education so I could become a nurse — after that, everything has simply been a bonus.

I never targeted a career in athletics, but I also wanted to take each opportunity that came up. Running has given me the education

I wanted, but much more than that, it has helped me see the world and given me a tremendous education outside the classroom.  I have raced on six of seven continents now, and I am enjoying roles such as this one in Pune that let me getting a deeper experience of the places I visit.  It’s just been a constant series of blessings for sure.

Q. After the London Olympics, now you are vying for a spot in the Tokyo Olympics. Tell us how are your preparations going for the same?
So far I am just doing the base phase of my training, but from Pune I will travel to Kenya where I will enjoy two months of warm weather and high elevation conditions to prepare. As one of the older runners who have qualified for the Olympic trials marathon, I know I have to be smarter with my training than in the past, so I will look to get the most out of my training while respecting my body’s limits as well.

Q. Are you doing any special training in India?
Not really, I am just trying to maintain my daily schedule while also making time for race activities —  knowing that I will crank up
the training from next week, so I
am enjoying the bit of rest I get in India.

Q. What do you think is the need of the hour for India in order to produce better runners in the long-distance category at the world stage?
I think India has good potential, but runners need time and guidance to pursue running. Also, proper incentives are needed so that people can justify the decision to pursue running. Myself, I pursued running because it also gave me opportunities for education and income that were not otherwise available. To produce great athletes, they need to see how running will improve their life as a whole, otherwise they have to leave running too early to pursue their lives.

Q. Your husband Jay is a world-renowned running coach, how helpful it is to have your life partner as your sports partner?
The best thing is that, as Jay has had good success in coaching, he knows what I am trying to do. At the same time, I know he places our relationship ahead of my running, so he works hard to be a great husband first and a coach only when I need that input. This is the best situation for sure.

Q. At the age of 41 years, it seems that there is no stopping you. How has your training regime changed with age?
These days my training has to be smarter. I use more gym, yoga, etc whereas I used to just run like crazy.  Now I have to know my limits and not push too hard — training for a race has to be more tactical than before — and sleep and nutrition are much more important these days.