Being public is better than private says Dutee Chand

Her family objected to the relationship and her older sister even threatened to disown her, but Dutee was unmoved. 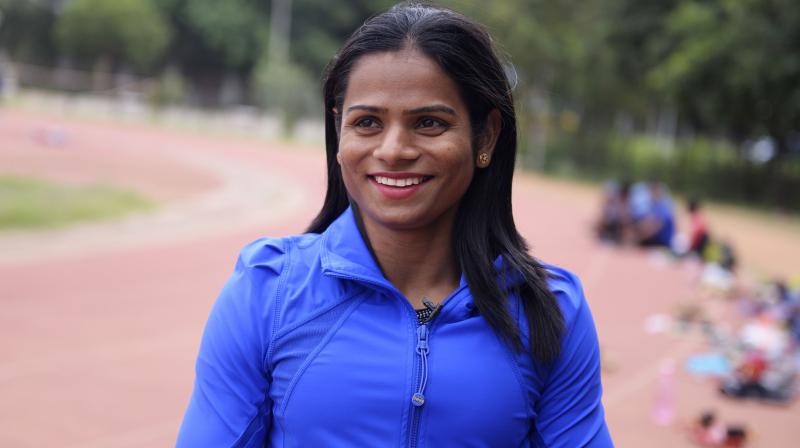 A person of strong will who does not allow her parents to come in the way of her relationship, Dutee made headlines in May when she made public her relationship with a woman from her village in Odisha. (Photo:AFP)

New Delhi: The first Indian athlete to confess to same-sex relationship, sprinter Dutee Chand says "coming out of the closet" was better than "hiding" her personal life from the public.

A person of strong will who does not allow her parents to come in the way of her relationship, Dutee made headlines in May when she made public her relationship with a woman from her village in Odisha.

Her family objected to the relationship and her older sister even threatened to disown her, but Dutee was unmoved, expressing her desire to settle down with the woman.

"There is no pressure on me at the moment because of my personal life, especially since I have come out of the closet. In fact, I used to feel pressured and scared when I was in hiding," the 23-year-old Dutee told PTI in an interview.

"After speaking up (about her relationship), a lot of people have shown support and appreciated my efforts and that really makes me feel good," she added.

Dutee again made headlines when she became the first Indian woman track and field athlete to clinch a gold in the World University Games last month by winning the 100m dash in a time of 11.32 seconds.

She is now set to run in the National Inter-State Championships, beginning on Tuesday in Lucknow in a bid to qualify for the World Championships, to be held in Doha next month.

"I will take part in the National Inter-State and I can assure you that you will see a lot of improvement in my timing," said the India's fastest woman who holds the 100m national record of 11.26 seconds.

Recently, she was to run in a couple of races in Europe but could not do so due to some "technical" problems.

She said her aim is to make a mark in the 2020 Tokyo Olympics, for which she is yet to qualify. The women's 100m Olympic qualification standard is 11.15 seconds.

"It is the dream of every athlete to qualify and compete in the Olympics and I am no different. I would definitely like to win medals and laurels for my country and my preparations for it are in full swing," she said.

"While there is a difference between my best timing and the Olympic qualifying timing at present, I am working really hard to cross that.

"My training schedule is pretty tough at the moment and I am sure I will definitely qualify for the Olympics this time," said Dutee who won a silver each in 100m and 200m at the 2018 Asian Games.

Recently Dutee signed up with global sports company PUMA to support her by providing custom-made performance gear. She joins a host of top Indian and international sports stars to be roped in by PUMA.

"It feels great to be associated with PUMA. I am sure my association with a big brand like PUMA is really going to help me in the long run. In fact they are designing new training shoes especially for me and I am really excited about it.

"Definitely. It is a big relief and I can see that I will get a lot of help in form of training kit and gear too which is great," said Dutee who has been struggling for funds to train and run races abroad.