U Mumba aim to bounce back at home

While a strong start will be critical for U Mumba, every match through the leg will be as important for the home team. 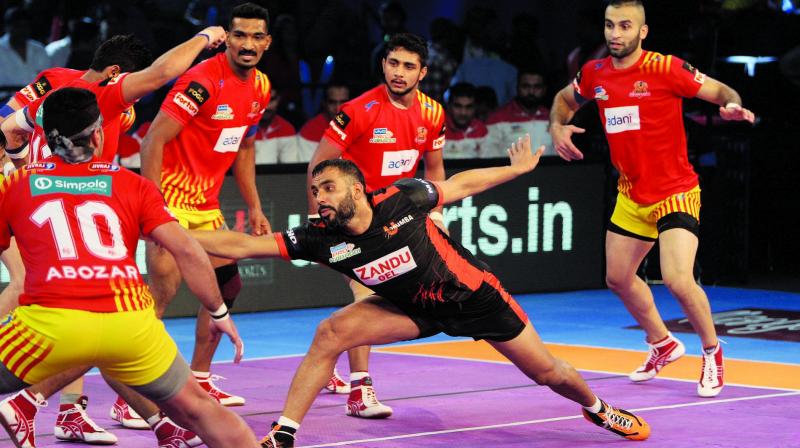 The home team stands at number 5 in the Zone A table with some major ground to cover in the next six home games.

Arriving in Mumbai along with the festivities, U Mumba is hoping that the auspiciousness of the season rubs off on the team as they start their home leg of Season 5 of VIVO Pro Kabaddi League on the 25th of August at the SVP Dome National Sports Club of India (NSCI) in Mumbai. The home team stands at number 5 in the Zone A table with some major ground to cover in the next six home games.

Having played six matches away, with three wins and losses in their bag, Mumbai will look to start in the positive on opening night. Expanding on the need for a win on the opening night, coach E. Bhaskaran while said, “Playing six matches at a go is not a pressuring situation for us. It is all about the first game, if we perform and do well, we will all gain confidence to move ahead. The initial momentum is very crucial during the home stretch.” Adding to coach’s sentiments was Captain of U Mumba, Anup Kumar who added, “It is all about getting that first match right. If you see Gujarat, their home stretch has been very good in terms of performance. This is largely because they started on the right note. Our first match is against Jaipur and if we do well there, I know that the team will capitalise on that first win and use that as a motivation for the rest.”

While a strong start will be critical for U Mumba, every match through the leg will be as important for the home team who have managed to get just 16 points from six games. Supratik Sen, CEO U Sports, was quick to point out that, this home leg will also mark the midway point for the team this season. He said, “I think the next six games are going to be very crucial, because by the end of it we would have played twelve games which will mark the mid-point of our campaign and we would be able to know where we stand.  We will know how much more we need to improve or perform and so we will give our home games, our best shot. “

While the team’s strategy for the home leg seems to start and build on positive momentum, team owner Ronnie Screwvala, stressed on the league being extremely competitive and all teams being equally matched-up, stating, “We have seen four cities, with four very different performances, which may all change again. For instance while Gujarat has done well Telugu and UP have faltered at home, so while there may be variations in results we should all keep in mind that each team plays 22 games, therefore to decide where we are, where we go is still going to take some time.”