We complement each other, says Srikanth

From training together to facing off in the finals at the Singapore Open Super Series, Sai Praneeth and Srikanth Kidambi. 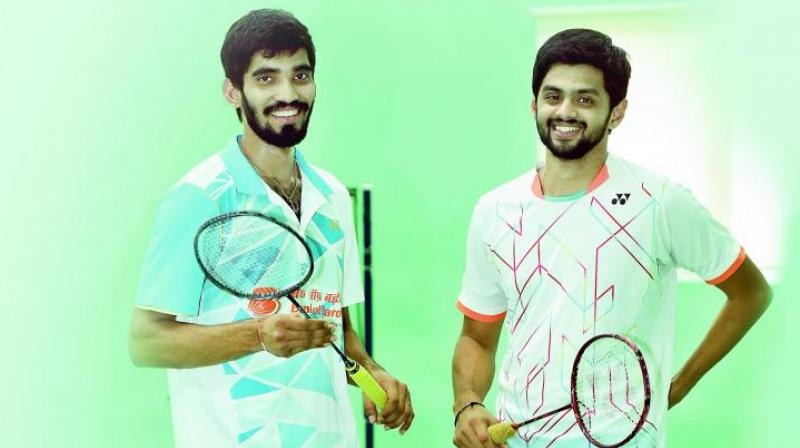 Yeh Dosti Hum Nahi Todenge... probably best describes the bond between Hyderabad-based shuttlers Sai Praneeth and Srikanth Kidambi. Days after their clash at the Singapore Open Super Series 2017, the finalists (winner and the runner-up) return home with their laurels. In an exclusive chat, the duo talk about competing against each other, bonding off the court and more...

Q. What was your initial reaction after knowing that you have to play your colleague in the finals?
Praneeth: I finished my match first and he (Srikanth) won his match later. It was just a final for me, except that I had to play against him! I did not think much about it (smiles). Generally, in India, nobody prefers to play against each other, and I, too, don’t prefer playing against my friend, but it is a rarity that happened. Still, I was all excited for the finals.

Srikanth: After I won my semi-finals, I learnt that I have to play him in the finals. I knew it would be tricky because we train every day, practise and spend a lot of time together. Having said that, it’s a summit clash, so I was all geared up. We met over dinner the day before the finals.

Q. So what was the dinner conversation about?
Praneeth: We never discussed anything about the game or the finals; we just enjoyed the food, relaxed and left. We were talking and joking about everything, but the game.

Srikanth: Since we train and play together for most of the time, we kept our conversations away from the game. We indulged in random talk and discussed movies, gadgets, etc. There was no agenda as such.

Q. Did you ever expect to play against each other?
Praneeth: I never expected or thought that I would compete with an Indian player,  that too my friend.

Srikanth: Not many countries have achieved this feat (having players in the final from the same country). But it was a really fantastic experience because both of us come from the same Academy. I had a feeling that I would play him sometime in the future, but I never thought it would come so soon.

Q. How was it winning/losing to your colleague?
Praneeth: It doesn’t matter who you are up against in the final, it’s just a game, and I was prepared for it. I was playing the Super Series final for the first time and I won, so I was very happy about it. I owe this success to my parents, grandparents and Gopi sir (Pullela Gopichand).

Srikanth: He’s my friend of course, but on court, he’s my opponent. I was only thinking about giving my best shot and enjoying the game. I used to play in the morning and he used to play during the night in the tournaments. So we hardly had any time to meet, except for the day before the finals. Even after the tournament, we did not get time to meet each other because both of us had different flights.

Q. On friendship
Praneeth: I have been practising at the Academy from the beginning and he joined later. But we know each other since a long time. Srikanth’s brother was very close to me initially, but once Srikanth joined the Academy, we started bonding very well. We used to hang out together, watch films, etc.

Srikanth: My brother used to tell me about Praneeth before I joined the Academy, but I came to know him after I was in. Once I knew him better, the bonding only became stronger. We complement each other well and we are there for each other.

Q. Bonding off the court
Praneeth: Whenever we have time, we go for a movie or a dinner. We don’t really party, but enjoy hanging out with our friends.

Srikanth: I am a bit reserved, so I only talk to people I know well, and he is one of those guys. Time just flies whenever we chat up.

Q. What do you share in common?
Praneeth: Both of us are very passionate about badminton.

Srikanth: We have the right attitude and train hard when it comes to the game.

Q. What do you like the most about Srikanth?
Praneeth: I like his swift moves across the court; he’s lightning quick when it comes to footwork. Both of us have our own style of playing, although I try to imitate him at times (smiles). Off the court, he’s very friendly and easy going — always chatting and cracking jokes about something.

Q. What do you like the most about Praneeth?
Srikanth: He’s very talented and I like his smashes. I tell people to look out because he hits them hard. Off the court, I only talk to people who I know well, and he’s one of them. He is one of those guys I love to have around. I can be myself with him.

Q. Any crushes?
Srikanth: Which girl will see me if I am sporting a beard like this? (Laughs). Also, most of the time goes into training. But I have a few crushes on some heroines (but he doesn’t want to name them).

Praneeth: I don’t have a girlfriend, but whenever I come across a good-looking girl, I keep saying, ‘Oh, she’s beautiful!’ (smiles)

Q. What keeps you constantly motivated towards the sport?
Praneeth: I guess Gopi sir (Pullela Gopichand) keeps inspiring us constantly. Whenever we are stiff and lethargic, he ensures that our focus is right back on the game.

Srikanth: I was able to overcome my injury so quickly only because of my passion towards the game. Gopi sir’s training and practice methods get us charged automatically. I thank him for trusting us and constantly keeping me motivated.

Q. You have missed out on a few tournaments and your rank has dropped down?
Srikanth: True. I haven’t played too many games, in fact, I have missed around 6-7 tournaments. I only started playing more games recently. I suffered a stress fracture to my right ankle after the Olympics. So I had to work on it and was recuperating for around 4-5 months.

Q. Upcoming tournaments
Praneeth: I am preparing for Thailand, Indonesia and Malaysian Open for the next three months.
Srikanth: I’m prepping up for the Team Championships next month in Australia.