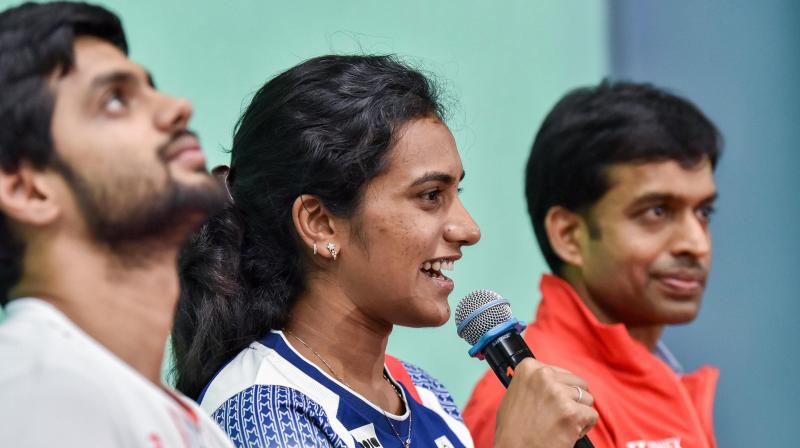 Sai Praneeth and PV Sindhu, whose ranking before the cancellation of qualifiers, was good enough to earn them a slot in the Olympics are now losing ranking points for not playing in tournaments that were postponed. Photo by Pavan

New Delhi: The Olympics postponement came as a great relief for Indian badminton players but they are wondering why the Badminton World Federation (BWF) has not yet frozen the rankings even after postponing several qualification tournaments.

The BWF had suspended all the World Tour events post the All England Championships due to the Covid-19 pandemic. Consequently, there were calls for the extension of the Olympic qualification period which ends on April 28.

But now with the International Olympic Committee (IOC) postponing the Olympics to next year, shuttlers believe its time BWF immediately freeze the rankings.

The BWF had said that it will make a further announcement on any implications related to the Olympic qualification period at a later date, but so far has done nothing to give any clarity on the issue.

"Our points are getting deducted even though the tournaments were postponed by BWF due to coronavirus. Swiss Open got postponed but my points got deducted. Like this, if they keep slashing the points for all the qualifiers which have been postponed, I don't know what will happen to my ranking," a worried Sai Praneeth told PTI.

"BWF should freeze the rankings and later decide about the qualification process, depending on the the dates of Olympics but as of now there is no clarity," Praneeth added.

Praneeth, who was set to make his Olympic debut on the basis of his ranking before coronavirus struck, said now he is not sure about his participation as he will have to fight again for points.

"If Olympics were to be held as scheduled in July, I would have been sure about my qualification but since it is now a year to go, the qualification process may be set in motion again which means I will have to fight for ranking points all over again. It is not easy to maintain that ranking. Can't say what happens after one year."

London Games quarterfinalist Parupalli Kashyap, who alongwith Saina Nehwal had earlier urged the world body to extend the qualification period, also wondered why it is taking so much time for BWF to freeze the rankings.

"Now that the Olympics have been postponed, we have to see what BWF will do with qualification. They haven't even frozen our rankings yet. We don't know what will happen." he said.

"As far as the preparations go, it will still be below par as it's impossible to train fully at home," said Kashyap.

A former top 10 player, H S Prannoy also expressed his concerns. "By the time tournaments start again my ranking would be close to 100. @bwfmedia is not doing anything to freeze the current rankings," he tweeted on Tuesday.

Praneeth feels there is no chance of a Suprseries tournament being held before July when the Olympics itself have been postponed.  "There is no scope or time to host these postponed qualifiers because the calendar itself has already been decided."

Sindhu's father P V Ramana feels BWF should freeze rankings as they were post 2020 All England Championships and then consider the tournaments which would be held next year between March 17 till April 28 as qualifiers for the Tokyo Games.