Nikita started skating in the year 2009 when she was in Class Three under the guidance of skating coach John David at the Faridabad Stadium. 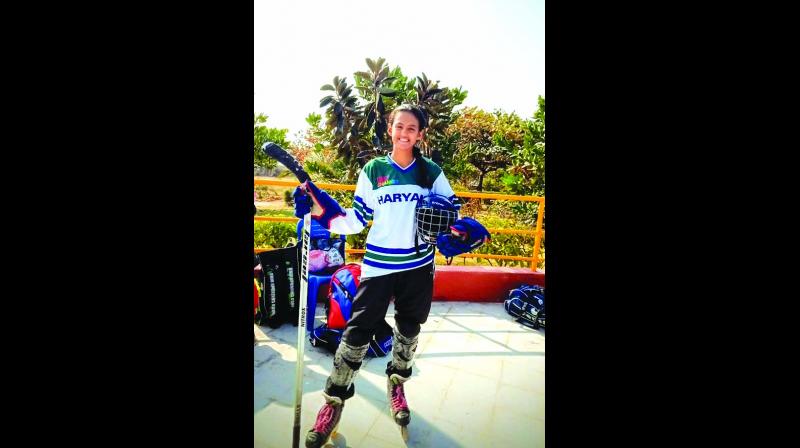 Delhi girl Nikita Sahu has started creating waves in the roller skating arena — one of India’s fast popularising sports. Nikita was crowned national champion at the 57th National Roller Skating Championship in Visakhapatnam last month and also went on to clinch a gold in the senior girls’ roller in-line hockey and now she is preparing to for the World Championship in Columbia later this year.

Roller in-line hockey or inline hockey is a variant of hockey played on a hard, smooth surface, with players using inline skates to move and hockey sticks to shoot a hard, plastic puck into their opponent’s goal.

In September, the 17-year-old also bagged silver in the junior girls’ inline hockey tournament competing against 12 countries at the 18th Asian Roller Skating Championship in Namwon, South Korea, where she led a 16-member India squad. Not only sports, she also excelled in her studies as well as she secured 92.7% marks in her Class 10 Board exams.

Nikita started skating in the year 2009 when she was in Class Three under the guidance of skating coach John David at the Faridabad Stadium.  During these years she became district speed champion and state speed champion several times.

She also started playing inline hockey and in the year 2017 and won the gold medal in RSFI National Games held at Jodhpur. In the year 2018 January, she won silver medal for Haryana in National Games held at Kurukshetra. In a chat with this paper Nikita shared how she manages studies and sport, her future planning and preparation for the world championship. Excerpts:

Tell us about your passion.... how did it start?
My brother used to do skating and I used to go with him during his practice at Faridabad Stadium.  That’s how I also got interested in the sport and started skating when I was in the third standard.

Who is your coach and please share your training schedule.
John David was our coach and we used to do 2-3 hours daily practice in the evening and in the morning from 5 am onwards. In 10th standard we shifted from Faridabad to Gurgaon and since then I am practicing at the Blue Bells Model School in Sector-4. My school has supported me a lot in continuing my passion. In Blue Bells School our coach Gaffur and sports in charge Lakhera has encouraged and supported me a lot. Since there was no skating rink in Gurgaon, I used to go to Faridabad on weekends for my regular practice.

What is your aim this year?
Since I am in 12th standard my first aim this year is to secure good marks in the board exams. Simultaneously, I spare time for skating and go for practice.  This year I have represented the Haryana team in Inline Roller Hockey and have won gold at the 57th National Skating championship held at Vishakhapattanam and hope to continue my form this year as well.

How do you manage studies and sports?
I have been into sports and studies at the same time since childhood and prefer to participate in both. I have to miss my school due to tournaments and camps for weeks and at times for months also; at that time my teachers and school cooperate with me well and help me to cover up the syllabus.

Tell us about yourself and your family.
I am a student of 12th standard in Blue Bells Model School in Gurugram. My mother is a lecturer and she takes me to practice everyday. My father is a businessman and he encourages me throughout to go forward and emphasizes studies along with sports. My brother Deepak Sahu is in college and also used to play inline hockey and this year also his team bagged gold medal in the Nationals held in Vizag.

What is your future planning?
In the upcoming years I have been planning to continue my sports and pursue admission to a good college.