An error by an Indian defender saw New Zealand equalise in the following minutes when Harris scored from a rebound. 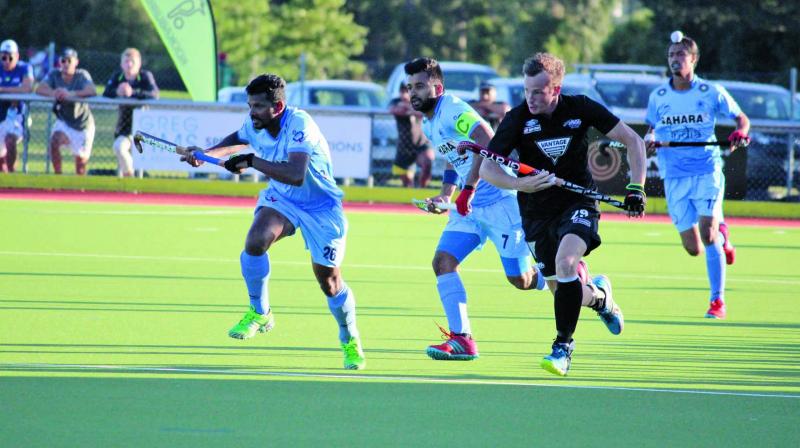 Action from the four-nations invitational hockey tournament match between India and New Zealand in Hamilton on Wednesday. India won 3-2.

New Delhi: The Indian men’s hockey team registered a fighting 3-2 win over hosts New Zealand in their opening match at the second-leg of a four-nation invitational tournament in Hamilton on Wednesday.

The home team were dominant early on and were quick to make potential circle penetrations but the Indian defence stood tall. India made the breakthrough when skipper Manpreet Singh picked out Vivek Sagar Prasad at the top of the circle. Vivek’s reverse hit rebounded off the New Zealand keeper and found Lalit who scored past Devon Manchester.

An error by an Indian defender saw New Zealand equalise in the following minutes when Harris scored from a rebound.

India came with a fresh approach after the change of ends and striker Mandeep Singh earned their first penalty corner in the 32nd minute, which was successfully converted by Harjeet.

Lalit later won India their second penalty corner in the 36th minute and this time Rupinder was bang on target.

A minute later, New Zealand earned a penalty corner which was successfully executed by Russell, who kept it low to the left pocket.India next take on Belgium on Thursday.