Kisenosato is the first Japanese sumo wrestler to earn the coveted rank of "Yokozuna" or 'grand champion' since 1998. 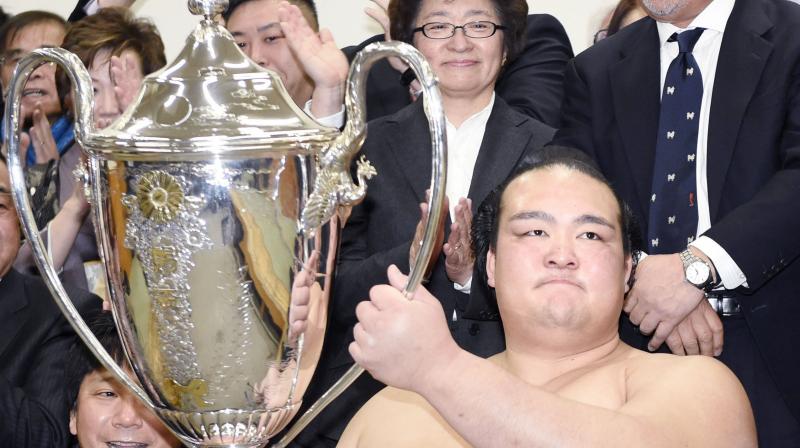 Tokyo: A Japanese sumo wrestler has reached the pinnacle of the country's ancient sport for the first time in almost two decades.

Kisenosato was promoted to the highest rank of "Yokozuna" on Wednesday, three days after winning his first title at the New Year Grand Sumo Tournament with a 14-1 record.

"I humbly accept the honor," he said at a ceremony in Tokyo. "I will concentrate on being true to the title of Yokozuna."

Kisenosato, whose real name is Yutaka Hagiwara, is the first Japanese wrestler to earn the coveted rank of "grand champion" since 1998.

Mongolians and Hawaiians have dominated the sport for more than a decade, causing concern among some sumo officials and fans. The last three wrestlers promoted to Yokozuna were Mongolian: Hakuho, Harumafuji and Kakuryu. Before them came Hawaiian Akebono and Samoan Musashimaru.

The sport's popularity has waned in recent years amid a series of scandals involving bullying of junior apprentices, and wrestlers gambling on professional baseball games. The lack of Japanese at the top, and competition from football and baseball, has also had an impact.

Wrestlers must normally win two consecutive tournaments to be promoted. Kisenosato only has one title but earned the top rank based on his consistent results in recent tournaments and the New Year title.

As much as his promotion will give the sport a shot in the arm, it comes at an advanced age for a sumo wrestler. Kisenosato is 30 years old. Mongolian Hakuho, who is 31, was 22 when he became a grand champion. He went on to win a record 37 championships.