Get ready to shake a leg

Flying Machine, the current number one B-boy of India, is coming to Kerala for the first time. 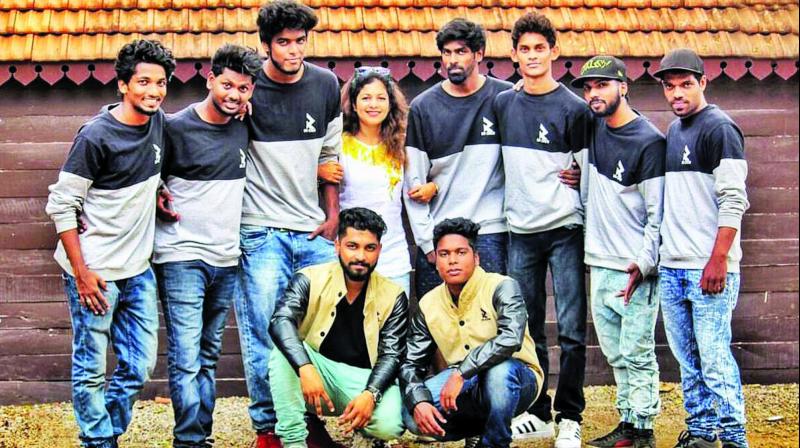 Nita Balakrishnan and her team at the DR Crew

For 46-year-old Nita Balakrishnan, age is just a number. When she wanted to learn dance over nine years ago, she enrolled at a dance school to learn Break Boying, a mix of hip-hop and break dancing, which is not so popular in Kerala. This former women’s cricket selection committee chairperson of Kerala Cricket Association went on to become the manager of the dance studio, DR Crew, where she had gone to learn dancing. Now, she's bringing Flying Machine, the current number one B-boy of India, to Kerala for the first time.

Nita always wanted to learn a unique dance form during her early years. But somehow, she couldn’t pursue western dance as those days there was only break dance which was not actually meant for girls. She decided to play cricket then during her college days at All Saint’s College, Thiruvananthapuram, where she represented the University of Kerala cricket team. Once Nita got married to K. S. Balakrishnan Nair, who runs a pharmaceutical wholesale business, she juggled taking care of her two children, Nikhil and Namrata. When they grew up and were able to take care of themselves, her old passion was rekindled.

By 2009, she came to know of DR Crew at Vellayambalam, in the heart of the capital city. A new world was there to welcome Nita who was all excited to learn b-boying, a popular style of street dance that was created and developed as part of hip-hop culture among African Americans and, later, among Latino youths in New York City. Nita’s face lights up when she says more about her latest love.

“B-boying is a dance directly inspired by intense break parts within songs that have percussive drum and instrumental sections.  A B-boy's movements are in response to these breaks and involve rhythm, style, and character and body control,” says Nita.

At the dance studio, she met Myth (D. T. Midhun Lal), Yanko (R. S. Vishnu Prasad), Taishon (M. S. Midhun), Reeko (Sachin Karthik), who all are identified by their b-boying names. When they sensed Nita’s enthusiasm, in no time they roped in her as their manager which saw the group going places. Their attempt to spread the culture in Kerala earned them finalist position in D3 and D4 on Mazhavil Manorama and they won the crowd favourite award at World of Dance (WOD) India 2017. In 2011, they won the title of fourth best B-boying team in India in Battle of the Year (BOTY) championship and also secured the runners-up position in the Chennai Street Festival in 2013. Nita says she wanted to popularise b-boying in her home state which prompted her to invite the number one B-boy, the Mumbai breaker, 21-year-old B-boy Flying Machine (Arif Chaudri), winner of India’s Red Bull BC One.

West Mumbai, Jogeshwari-based B-boy Arif Chaudri is better known as Flying Machine, who had won the BC ONE 2018 India championship for the third time in four years. He also represented India in the RED BULL BC ONE world finals and made it to the top 16 for the world championship. He had won 13 awards and has been B-boying since 2009. On his first visit to South India, he will be here in the capital city until Christmas eve. Flying Machine who spoke over the phone to DC informed that there is no age limit to practise B-boying, but insists on lots of practice.

“I started B-boying as a nine-year-old when one of the boys in my neighbourhood in Jogeshwari showed me a video. Since then, I has been hooked to it and after my junior college, I am busy practising and travelling at least eight hours a day”, said Flying Machine.

Kerala’s first B-boying team, DR CREW is organising a workshop followed by a B-boying battle for all dance enthusiasts. DR Crew is introducing for the first time in South India, the annual workshop, their marquee event, which attracts participants from all over India.