Olympic medal taught me what wrestling is all about: Sakshi Malik

Sakshi understands that her medal has put spotlight on wrestling. 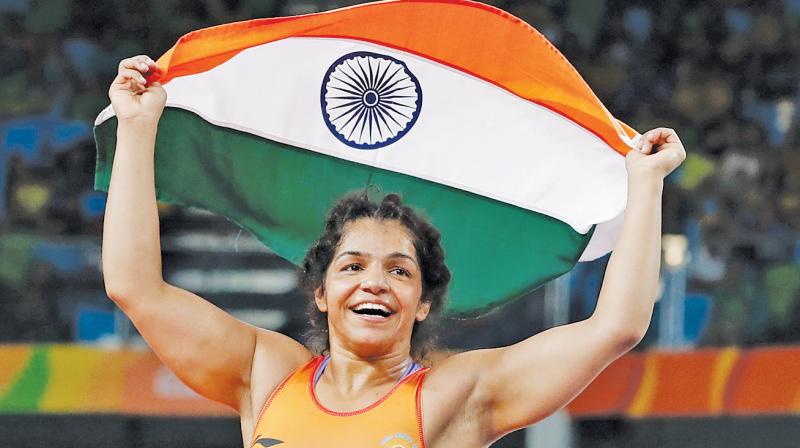 New Delhi: In an interview days ahead of the Rio Olympic Games, the Phogat sisters — Geeta, Babita, Vinesh — and Sakshi Malik were having a gala time backing and teasing each other, when asked about who among them would be the first to get home a medal.

Some pointed towards Babita, while few took Vinesh and Babita’s names till Sakshi chipped in from behind and declared, “No one has taken my name but it is me who will get wrestling’s first medal (women’s) for India.”

Her confidence was infectious and evoked hope. It took just 20 days for the Haryana girl to make her words come true and sweep the nation of its feet on the night of August 17 when she landed a bronze in the 58kg category. Waiting with bated breath for India to open their account in Rio, Sakshi’s feat had millions awake and her parents, Sudesh and Sukhbir, dancing in joy on their little girl’s achievement.

How does she looks back at her medal now? Is it a distant memory as she now prepares for 2017, one asks.

“No!” says the 24-year-old with child like enthusiasm. “It was the best moment of my life and I will always hold on to it. Of course, now I am preparing for the world championship and the Asian and the Commonwealth Games in 2018, but this medal will remain with me forever. It is my identity.”

Elaborating on how it had changed her as a wrestler and a person, Sakshi concedes that she “actually learnt about wrestling after standing on the podium in Rio”.

“Before the Olympics, I only knew 40 per cent about the sport of wrestling. Defence karo, attack karo, bas yehi sab (Focus on defence, attack and that’s all).

“But competing at the Olympics opened my mind to a lot of things. There is planning, execution, pressure of a different level and finally the win. I think it has brought a lot of maturity in my game.

“I think about a lot of aspects now. I think I will be a far better athlete in the 2020 Tokyo Games than what I am now.”

Sakshi understands that her medal has put spotlight on wrestling. Born and brought up in Rohtak, Haryana, where parents are mocked at when they send their young girls to akhadas and even coaches discouraged to give up on a “sport meant only for men”, Sakshi’s success and fame has brought about a sudden shift.

Today, parents want their daughter to be the next Sakshi Malik. National women’s coach Kuldeep Singh says his trainees have gone up by at least 30 per cent after Sakshi’s medal.

“Now everyone wants to be like Sakshi... One medal has done so much.

“When I took up as the national coach in 2011, people said I should be doing something sensible!

“Today, I get numerous calls every day from people asking for their daughters to be enrolled with us. We are glad to see this day.”

For Sakshi, life has changed manifold. She now has a barrage of people surrounding her: make up artists, a manager, hair stylists, corporate houses, etc. And even though she is not complaining about the limelight — she likes to dress up, she says — one thing that got affected for a while was her training and rest time.

“I get affected sometimes because I have to be fit and devote myself to long hours of practice.

“One of the toughest things after returning to the mat post Rio was to find my stamina again. It had been sometime and I had to summon all my courage to build on it.

“I enjoy working hard and after Rio, I am now looking ahead at the World championship next year and then the Asian Games in 2018,” said Sakshi, who will be seen in action at the Pro Wrestling League Season 2 beginning January 2.