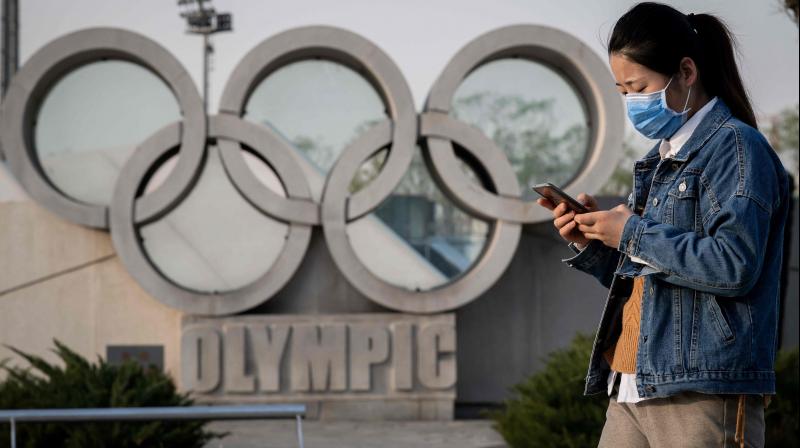 A woman wearing a face mask, amid concerns of the COVID-19 coronavirus, walks past an Olympic rings sculpture. AFP Photo

Tokyo: Japan has asked for a one-year postponement of the Tokyo 2020 Games over the global coronavirus pandemic, and the International Olympic Committee has agreed, the country's prime minister Shinzo Abe said Tuesday.

"I proposed to postpone for about a year and president Bach responded with 100 percent agreement," Shinzo Abe told reporters referring to Thomas Bach, head of the IOC.

Bach has agreed “100%'' to his proposal of postponing the Tokyo Olympics for about one year until 2021 because of the coronavirus outbreak.

Earlier in the day, Olympic Committees of three nations made it clear that they will not be sending their teams to Tokyo unless the Games are postponed, mounting intense pressure on the International Olympic Committee to take a decision and ease the nerves of thousands of athletes who are eager but unable to prepare for the Olympics due to the lockdown in several countries in wake of the COVID19 outbreak.

Britain fired the first salvo this morning when it announced its decision not to send a team to the Tokyo Olympics. Chief of the British Olympic Association, Hugh Robertson said that with athletes unable to train together and fears the spread of the coronavirus will worsen in the coming weeks in Britain there was little chance of sending a team to Japan,

The BOA, the British Paralympic Association and funding body UK Sport are to hold a conference call later in the day with bosses from the summer Olympic and Paralympic sports where it is expected they will rubberstamp a call to delay the Games.

Reacting to this, Japanese prime minister Shinzo Abe scheduled a conference call for Tuesday with the International Olympic Committee president Thomas Bach and a few officials of the organizing committee to hold discussions on the way forward for the Games.

But within hours, New Zealand Olympic Committee called for a postponement and German Olympic chief launched a scathing attack on the IOC and its German president Thomas Bach for delaying the decision and thereby keeping the athletic community on tenterhooks.

"Our focus is first and foremost the athletes. It has been important to us to give them the opportunity to talk to us. We value their resilience and flexibility and we know working through the changes won't be easy," Smith said in a statement.

"We support their position and will now share their views with the IOC as we advocate internationally on behalf of New Zealand athletes and sport. We reiterate the need for a swift decision."

Calling for a postponement, the president of Germany's national Olympic association (DOSB) Alfons Hoermann slammed the International Olympic Committee (IOC) for its apparent reluctance to reschedule.

"It would have been an enormously valuable signal to the public to call off the current schedule... the health of the global population has absolute priority," said Hoermann in an online statement.

With the global sporting calendar on hold due to the coronavirus crisis, the IOC has said it is looking into a postponement of the Summer Games.

Hoermann said he welcomed that decision, but said that Germany "would have liked a clear statement...that the Games cannot take place as scheduled and that there are now consultations on alternatives."

"Our athletes are currently in an extremely difficult situation: they are barely able to train thanks to the official measures and for many, the road to qualification is unclear or almost impossible," he added.

Hoermann also warned that "the public perception of the IOC and of sport as a whole will now be shaped by how the next steps are communicated and carried out in the next four weeks."