A win in the first round may hand Sindhu a chance to avenge her loss in China as she is likely to face Chochuwong again. 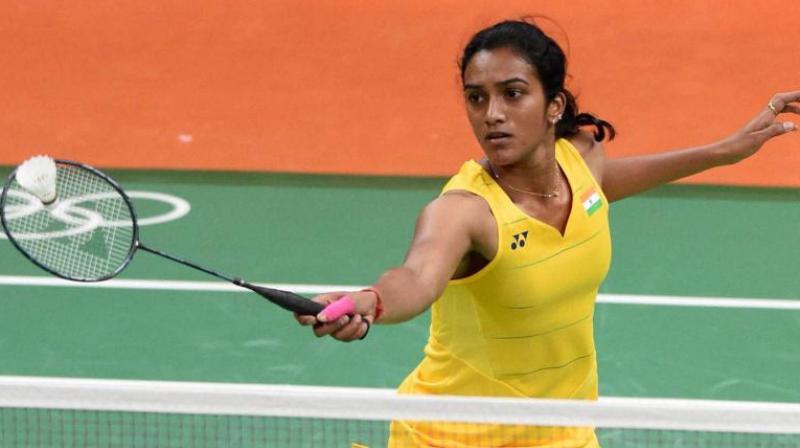 Besides the World Championships final, Sindhu has reached the summit clash of only one BWF World Tour Final this year -- the Indonesia Open Super 1000 -- but the title eluded her. (Photo: AP)

Incheon: World champion P V Sindhu will seek to quickly get over the disappointment of an early exit in the China Open when she resumes her quest for a BWF World Tour title this season at the Korea Open Super 500 tournament beginning here on Tuesday.

After the high of winning the World Championships, Olympic silver medallist Sindhu was knocked out of the China Open Super 1000 event by Thailand's Pornpawee Chochuwong in the second round last week.

The 26-year-old Indian, who had won the Korea Open title in 2017, will have to sort out the little things that had led to her early ouster in China and turn her focus on the USD 400,000 tournament in Incheon, where she will face USA's Beiwen Zhang in a tricky opener.

Sindhu had defeated Zhang en route her World Championships gold at Basel and she will look to produce her best again against the Chinese-born shuttler, who had defeated her twice last year at India Open and Denmark Open.

A win in the first round may hand Sindhu a chance to avenge her loss in China as she is likely to face Chochuwong again.

Besides the World Championships final, Sindhu has reached the summit clash of only one BWF World Tour Final this year -- the Indonesia Open Super 1000 -- but the title eluded her.

London Olympics bronze medallist Saina Nehwal, who had claimed the Indonesia Masters early in the season, hasn't looked her usual self this year.

Saina, who has been bothered by pancreatitis and few injuries, lost in the first round of Malaysia Open, New Zealand Open, Sudirman Cup and China Open.

The eighth seeded Saina will hope to turn around her indifferent form when she opens her campaign against Korean Kim Ga Eun.

The 29-year-old from Hyderabad has a 2-0 head-to-head record against Kim and another win over the Korean is likely to pit her against Indonesia's Gregoria Mariska Tunjung.

B Sai Praneeth, who had ended India's 36-year-old wait for a medal at the World Championships, will also look to continue his impressive run after a quarterfinal finish in China Open last week.

However, Praneeth will face a dangerous opponent in fifth seed Anders Antonsen of Denmark, who had returned with a silver from the World Championship last month.

Former Commonwealth Games champion Parupalli Kashyap, who has looked impressive this season, will take on a qualifier in his opening round.

Satwiksairaj Rankireddy and Chirag Shetty, who had broken into world's top 10 after winning the Thailand Open last month, will face fourth seeded Japanese pair of Takeshi Kamura and Keigo Sonoda in the men's doubles opening round.

Manu Attri and B Sumeeth Reddy will take on a qualifying pair. P