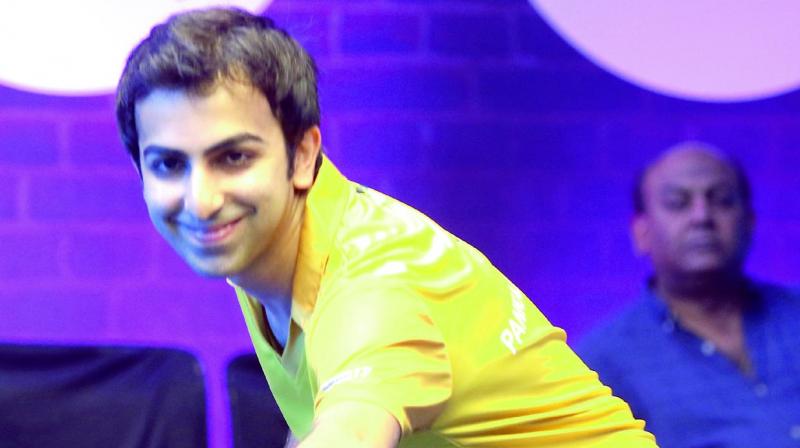 They are currently at the top of the five-team standings with 13 points after finishing all four ties in the Cue Slam which is being organised in association with Billiards & Snooker Federation of India.

Dharminder Lilly rallied to beat Hyderabad’s best bet Amir Sarkhosh 2-1 in the pool singles encounter. This was first defeat for Sarkhosh on the pool table in three matches.

Advani and Vidya Pillai accounted for Hyderabad Hustlers pair of Lucky Vatnani and Amee Kamani 2-1 (53-13, 26-33, 45-0) in the 6-Red Ball mixed doubles snooker to extend their  lead to 2-0. Chennai Strikers dominated the first frame giving Hustlers no chance to pot the balls. In the second frame too they were ahead but consecutive fouls by Advani and Vidya gifted Hustlers eight points. However, Vidya recovered just before time to pocket the brown ball and tie the second frame 26-26. Both teams were left to pocket the black ball for winning the frame. After five-minute dual Vatnani finally claimed it to tie the match 1-1.

In the third frame, Chennai Strikers made no errors to claim the match with ease. In pool doubles, Vidya and Pandu Rangaiah prevailed over Amee and Anuj Uppal 2-0 to take a decisive 3-0 lead for Chennai Strikers.

Advani steamrolled Sarkhosh in the icon players snooker clash 2-0 (35-18, 45-3), while Faisal Khan outclassed Kamal Chawla 32-14 in singles clash to win his first match of the tournament and bag the tie 5-0 for the Strikers.