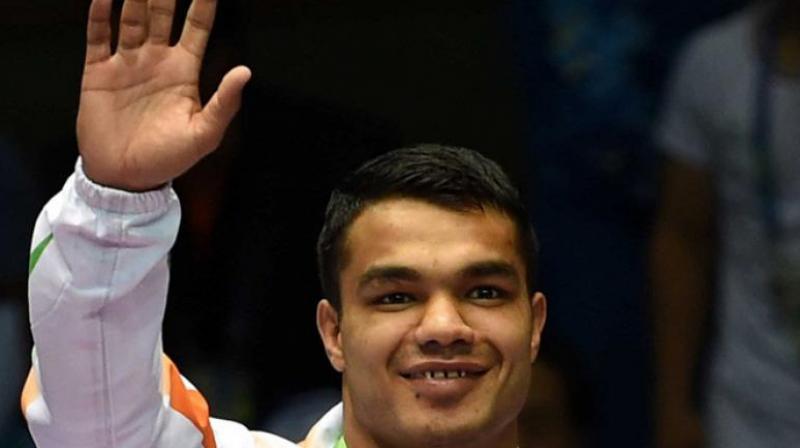 Tokyo: The seasoned Vikas Krishan (69kg) will open India's boxing campaign here on Saturday against local favourite Sewonrets Quincy Mensah Okazawa, just one of the several tricky opponents that the country's pugilists will have to get past as they negotiate a challenging path to the medal rounds.

Vikas will be the lone Indian boxer in action on the opening day of boxing competitions at the Ryogoku Kokugikan arena and has therefore opted out of the opening ceremony this evening.

The 29-year-old is chasing a medal in what is his third and, in all likelihood, final shot at Olympic glory.

He has almost every other medal in his cabinet, including the world championships and is desperately pursuing the Olympic podium, his efforts also including stints in the US professional circuit.

"I cannot be more prepared than what I am right now," he had told PTI in an interview before the Games and the preparations is set to be put through a very tough test.

If the Haryana-lad crosses this hurdle, he will be fighting Cuba's third-seeded Roniel Iglesias in the round of 16. Iglesias is the 2012 Olympic gold-medallist and also a former world champion.

The nine Indian boxers in fray at the Games were handed draws ranging from tricky to difficult on Thursday. The group is expected to make up for the disappointment of the 2016 Rio Games where the nation did not win any medals after a bronze each in 2008 and 2012.

Top seed and world no.1 Amit Panghal (52kg) was among the four who got byes into the pre-quarters. But the road to medal rounds does not seem easy for any of them.

Panghal will step into the ring on July 31 in the last-16-stage against the winner of the contest between Botswana's Mahommed Rajab Otukile and Colombia's Yuberjen Herney Rivas Martinez.

Martinez was the light flyweight silver-medallist at the Rio Games.

She is up against Dominica's Miguelina Hernandez and would be facing Colombian third seed Ingrit Lorena Victoria Valencia if she wins the lung-opener.

Valencia is the 2016 Olympic bronze-medallist and also the Pan American Games champion.

Satish Kumar (+91kg), Lovlina Borgohain (69kg) and Simranjit Kaur (60kg) were the other Indians to get first-round byes.

The United States has won a mammoth 50 Olympic gold medals in boxing and a record 114 medals in total (men's and women's events combined).

Kazakhstan has won at least one boxing gold medal in each of the past six Olympic Games.

At the 2016 Rio Games, which was marred by controversies over the quality of judging, Uzbekistan took home seven medals in boxing, three of them being gold, to finish joint highest alongside Cuba.

A total of 289 boxers from 81 countries will be fighting it out at the Games this time.