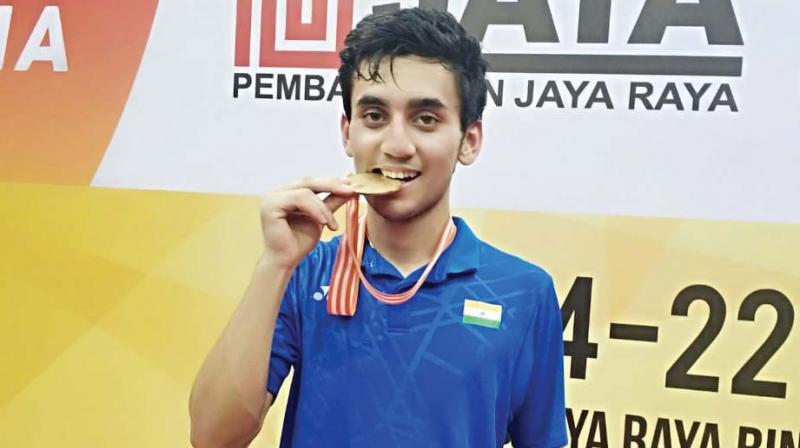 Lakshya Sen with his gold medal at the Asia Junior Championships in Jakarta.

The sixth seed Indian from Uttarakhand, who had clinched a bronze medal in the last edition, posted a 21-19, 21-18 win over Vitidsarn in the summit clash that clocked 46 minutes.

“I am really happy with my performance. I got good support from my team members as well. This Asian Junior gold is precious. The focus was on recovering well after each match and I am happy I could play well and win,” an ecstatic Lakshya said after the win.

Late Gautam Thakkar (1965) and Olympic silver medallist P.V. Sindhu (2012) are the only two Indians to have won the title earlier. Sindhu also had a bronze in 2011, while Sameer Verma took a silver and a bronze in 2011 and 2012 respectively and the pair Pranav Chopra/Prajkta Sawant bagged a bronze in 2009.

Lakshya has been in sensational form in the tournament as he stunned second seed Chinese Li Shifeng, fourth seed Indonesian Ikhsan Leon-ardo Imanuel Rumbay in the semifinals and top seed Vitidsarn in the final.

Lakshya was cautious in his approach and trailed by a few points in the first game before he caught up at 9-9 and then used his customary drop shots and half-court smashes to go ahead 13-11.

He didn’t look back thereafter despite his opponent coming close at 16-15.

In the second game, Lakshya led with a slender margin but managed to maintain a two-point lead almost all the time.

However, midway through Kunlavut inched closer and at 10-11.

Yet, there was no real threat to the Indian who forced Kunlavut into errors at the net, gaining a four-point lead.

Not to be outdone, the Indonesian reduced the margin but it was too late for him to stage a real recovery.

“It was very hectic. In fact, ahead of the tournament I had to tweak my training a bit as I had suffered a shin split. During the tournament also I had to take pills sometimes to curb the pain,” he said.