India captain Sreejesh P.R. spoke about taking the confidence from the New Zealand series to the upcoming Asian Games. 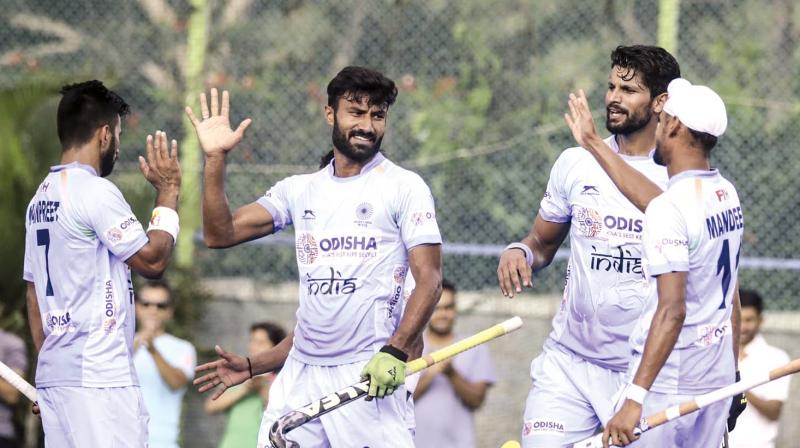 Indian players celebrate their 4-0 win over New Zealand in the last game of the three-match series in Bengaluru on Sunday.

Bengaluru: India rounded up their preparation for the Asian Games by completing a clean sweep against New Zealand in the three-match men’s hockey series at the Sports Authority of India Centre on Sunday. On an overcast evening, India took the third match 4-0 to seal the series 3-0.

Drag-flick expert Rupinder Pal Singh opened the scoring in the eighth minute, converting a penalty corner. The second goal followed soon after with Surender Kumar going past the Kiwi defence to make it 2-0.

The second quarter was goalless with the Black Sticks failing to convert three penalty corners and had their first shot on goal in the 25th minute.

Coach Harendra Singh emphasised on the importance of maintaining a clean sheet.

“We wanted a 1-0 or a 10-0 result without conceding a goal, that was the main objective during this match,” he said.

India captain Sreejesh P.R. spoke about taking the confidence from the New Zealand series to the upcoming Asian Games.

“The loss to Australia in the Champions Trophy final hurt, especially the penalty shootout and now we are prepared for the Asian Games.

“This series against New Zealand gave us the practice we needed in order to be ready,” the goalkeeper said.