And so, they introduced a rendition of football, called Tagball that is only for women. 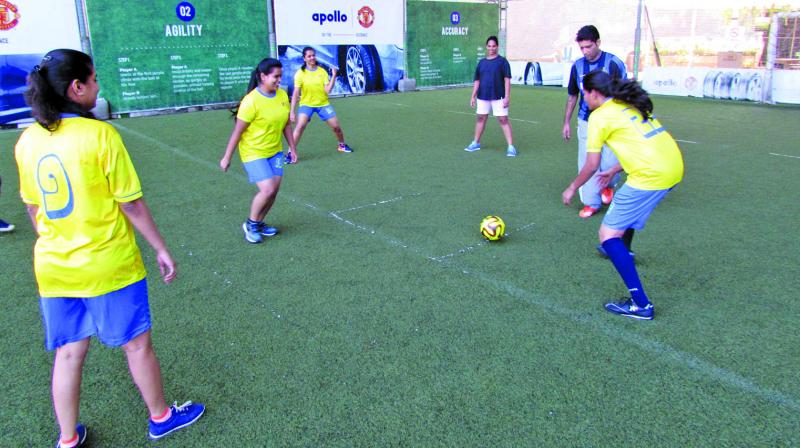 An ongoing session of Tagball.

One can often see boys and men running across the field playing football, passing the ball from one team member to the other, yelling testosterone filled curses at failed goals and ending the game in the good spirit of sportsmanship. This is what the A Team Sports wanted to change — the little representation of women in the field of competitive sports being their aim. And so, they introduced a rendition of football, called Tagball that is only for women.

Tarun Rao, who is the manager curriculum with A Team Sports designing intellectual properties in sports, explains the fundamental idea behind Tagball. “Women usually prefer playing or participating in activities like yoga and zumba. Until now, there was rarely any platform for women to play competitive, contact sport. While activities like yoga and others are done in a group, they are played individually; meaning they don’t fall under the purview of contact  sports. Changing that was the fundamental idea behind tagball,” says Tarun.

Having been a professional football player for eight years, Tarun was very well versed with the dos and don’ts of the sport — something that helped him develop it into a simpler, flexible game. The concept of the sport revolves around two teams of five members each competing against each other. Referred to as freestyle football for women, the game doesn’t abide by the traditional football rules. “Rules have been designed keeping in mind three sports: football, handball and throwball,” explains Tarun. Having curated the games by merging rules from three different games, he thinks it gives women the liberty to play without any insecurities. “Curating the sport from three different rulebooks makes the sport easier to approach compared to ortodox football. For instance, when playing Tagball, even if a woman is slow-paced, she could easily throw the ball across the field — traditionally, she would have to run through the field. There is also leeway given in several other instances. “The sport enables one to use any part of their body. Think about it as a football match where you can use your hands as well,” Tarun points out.

If the sport is so flexible to accommodate women, what comprises a foul? The foul, explains Tarun, in called the ‘tag’. “If team A has the ball in possession and is passing it among their team members, touching them would be considered foul. The game stops right over there and is resumed, at the same spot, by team B.”

When developing the game, Tarun consulted close female friends and associations. “Over the last three years, the segment of women playing football or any other sport has diminished quite a bit. There was no infrastructure available for them. When I began researching for this game, I asked my close females friends about the difficulties they face when playing sports. Interestingly, they felt sportsmanship is missing when it comes to playing games with each other. This was exactly what we wanted to change,” he concludes.