Gemechu, running her first half marathon, shaved four seconds off the previous record set by Kenya’s Mary Keitany in 2009 to take the top prize. 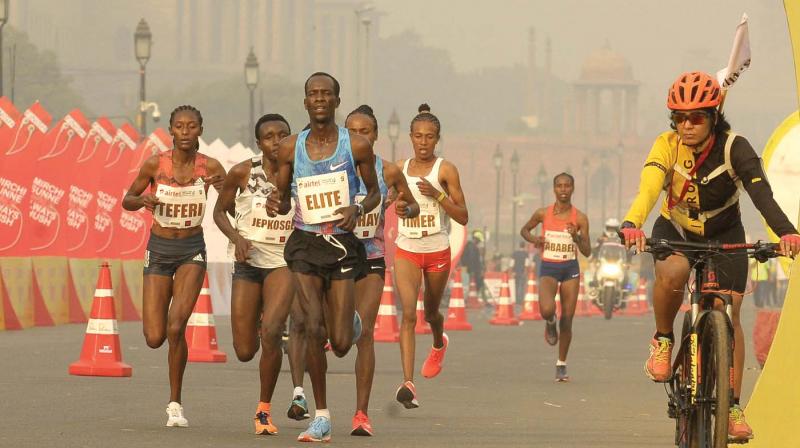 The elite women’s athlete in action during the Airtel Delhi Half Marathon on Sunday. (Photo: Pritam Bandyopadhyay)

New Delhi: Ethiopia’s Tsehay Gemechu stole the show as she lifted the elite women’s title with new course record time of 1:06:50 on her debut at the Airtel Delhi Half Marathon at the Jawaharlal Nehru Stadium here on cool and sunny Sunday morning.

Gemechu, running her first half marathon, shaved four seconds off the previous record set by Kenya’s Mary Keitany in 2009 to take the top prize.

Current world half marathon record holder Kenya Joyciline Jepkosgei came second with a time of 1:06:56 ahead of Zeineba Yimer of Ethiopia, who was three seconds slower.

All eyes were on Gemechu’s countrymate and event favourite Tirunesh Dibaba but the three-time Olympic champion failed to deliver on the day as she was gripped by fatigue.

It was Ethiopia’s Teferi Senbere who was leading the pack at 19km and had 12-second advantage over the chasing pair of Gemechu and Jepkosgei but she failed to capitalise on it.

However, with little more than a kilometre to go, Teferi started to slow  down dramatically and was soon barely above walking pace.

Teferi drifted to the side of the road and with about 700 metres to almost came to a halt as Gemechu and Jepkosgei sped past her before dropping out due to dehydration, although she recovered quickly after getting treatment.

Gemechu then showed her speed honed over three quick and high quality 10km races earlier in the year and shook off the world record holder for 10km and the half marathon as the finish line approached. “To be honest, I hadn’t changed my training to do this race so I’m surprised that I won and ran so fast,” said the beaming Gemechu. “When we went past Teferi, I actually thought it was a tactic, that she was slowing and was going to run with us before sprinting,” she added.

The men’s elite crown also went to Ethiopia as Adamlak Belihu bettered his last year timing to emerge on top with 59:18. He came second in 2017 clocking 59:51 on his debut.

“I was not able to win last year. I trained harder this year. I was determined to win this year and I am happy that all my hard work has borne fruit,” Belihu said.

“Last year was my first experience here. I had better knowledge of the course this year which came in handy. The pacemaker did not do the kind of job I wanted, otherwise I would have perhaps registered a better timing. But I am happy with my performance,” he added.

His compatriot, 19-year-old Amdework Walelegn was a close second with a personal best of 59:21. Kenya, the other powerhouse of long distance running, got the bronze as Daniel Kip chumba finished third with a time of 59:48.

“After Asian Games I have started my preparation for the Delhi Half Marathon and I am happy I gave my personal best here,” Sanjivani said.

Among the Indian men, Abhishek Pal finished first at 1:04:13. He was given a tough fight throughout the race by Avinash Sable who came second taking a mere one second more, at 1:04:14. Gopi Thonakal was third with 1:04:15.