The series is part of the Asian Games build-up for the Men in Blue. India had won the first match 4-2. 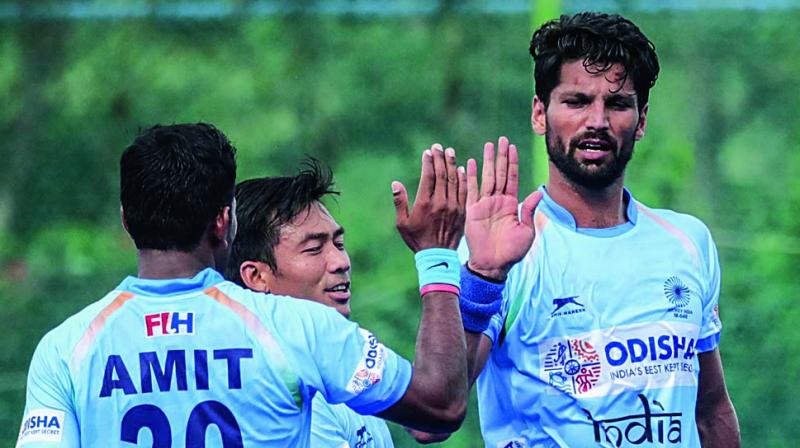 Indian players celebrate their 3-1 victory over New Zealand in Bengaluru on Saturday.

Bengaluru: India registered their second consecutive victory, defeating New Zealand 3-1 in the second match of the three test men’s hockey series at the Sports Authority of India here on Saturday.

The series is part of the Asian Games build-up for the Men in Blue. India had won the first match 4-2.

Drag-flicker Rupinder Pal Singh opened the scoring for the hosts in the second quarter, when he converted a penalty corner in the 24th minute.

New Zealand’s Stephen Jenness equalised soon after, but India hit back through forward S.V. Sunil in the 27th minute.

The game was sealed in the final quarter through some brilliant work from the right flank. Sunil cut through the New Zealand defence and young striker Mandeep Singh finished the move to put the game beyond the visitors’ reach.

“In the last match, we scored three goals from penalty corners but we could score only one from six penalty corners today, so that is some thing we have to work upon” he said.

With an eye on the Asian Games next month, he spoke on the need to adapt a different approach according to match situation.  Kiwi striker Jenness rued the lack of chances created by his team. “Right now, we are not playing well and we have many players injured, this is a part of our preparation for the World Cup later this year and we will get better,” said Jenness.

The third and final game will be played on Sunday.