Shooting for the stars

The youngster started training under former world number one rifle shooter Anjali Bhagwat who has her academy in Pune & the results were conspicuous. 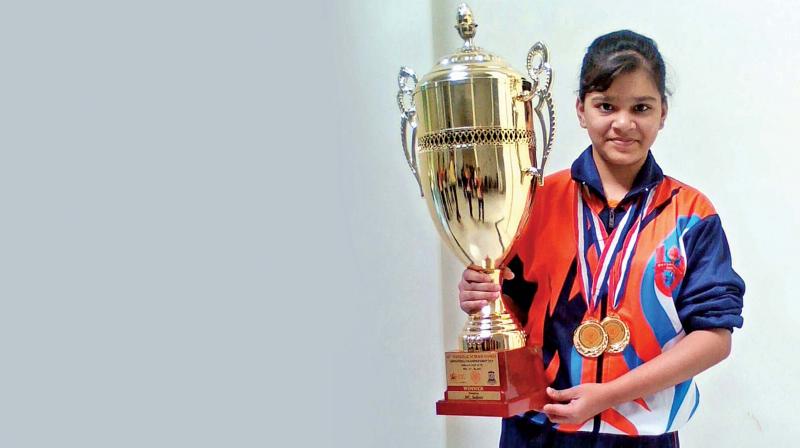 After Winning gold at the kss memorial shooting on monday, Pune shooter Nupur Patil has all eyes on the world-cup next year.

To a great extent, Nupur Patil’s career in shooting is influenced by her parents. A father who closed one of his businesses and a mother who sold her jewellery to see their daughter bag medals, have only witnessed remarkable feats from the 17-year old when it mattered the most.

Earlier this week on Monday, the Pune-based shooter shot 250 to win yet another gold medal at KSS Memorial Shooting Championship. It was a gripping competition between Nupur and her  counterpart Nischal Singh from Haryana, who edged closer to finish at second with 248.7.

Her father, Rakesh Patil confesses he was as anxious as his daughter, as he watched from the sidelines. The whole family travels together whenever Nupur plays in India.

Mr Patil who owns a coconut shop and an ink cartridge refilling shop, had himself dreamt of becoming a shooter. He found his calling  in Kabaddi. However, he could not make a career  out of that either. But it was that spark he saw in his daughter that re-ignited his dream. So he then decided to turn it into reality. “Inta paisa toh kabhi thha nahi ghar mei,” he says. “I had some savings and my wife told me that she wants to sell her jewellery. She was really keen on it. It was like a gamble.”

When she was growing up, he used up all of his saving of Rs 1.15 lakh to buy a customised air-rifle for his daughter. Soon, the father-daughter pair had to go out to train in the outerskirts of the city. They also released colourful balloons on a board just in a fair or exhibition.

At the age of 13, she created a national record by shooting 410.3 and also became the national champion. A kid playing inter-school competitions had arrived to the scene.

But what followed was a year of average results. “We did not know where the competitions were being held. Most of the times, she was playing inter-schools and training was at home,” says her father.

Shortly, she was approached by an institution named Lakshya Sports Foundation. The organization then took care of the shooter’s expenses and made sure she was playing at top competitions. She did not disappoint. Nupur grabbed seven medals in national and state level tournaments in 2017.

The youngster started training under former world number one rifle shooter Anjali Bhagwat who has her academy in Pune and the results were conspicuous.

Nupur has a certain clarity and she takes one step at a time. “I am taking small steps towards becoming a good shooter. There is a chance at the World Cup next year and if I make it, I will grab a medal,” says Nupur.