Making the right moves at 7

Little Ahana was the silver medalist in the Under-6 category of the Maharashtra State Schools’ competition last year. 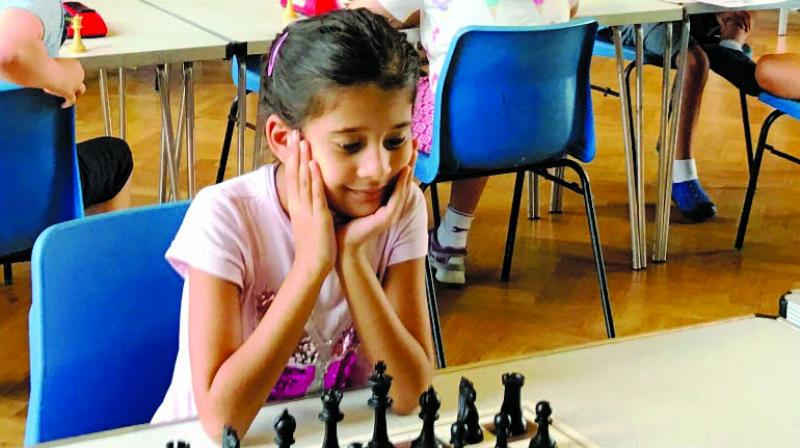 It was a packed weekend when the Indian cricket and hockey team were battling it out with archrivals Pakistan for supremacy in the ICC Champions Trophy and the Hockey World League semi-finals on the English soil. India had mixed fortunes and won the hockey league match but lost out their title defence in cricket.

Incidentally, a little girl Ahana Shah from Mumbai won a bronze medal in chess and made India proud, too.  At an age when children prefer toys, Ahana showed her prowess by playing an intelligent game of chess and coming up with a brilliant score of four points out of five in the Under-7 category of the 2017 Kenilworth Junior Open Rapid Chess Tournament.

The seven-year-old Mumbai girl was the only unrated participant competing with other boys and girls having English Chess Federation (ECF) ratings as high as 36 and 42, which is equivalent to Fédération Internationale des Échecs 1200 ELO (a method for calculating the relative skill levels of players in competitor-versus-competitor games). Despite this handicap, Ahana, a second-grade student at Dhirubhai Ambani International School in Mumbai still managed to finish in the third position.

At the end of the fifth round, the talented young chess buff had accumulated a total of four points and was tied with two other players, Muthuvelu Rithvik and Dicen Elis, both from England, and she had to settle for bronze after the progressive scores. Muthuvelu of Hallfield and Dicen of St. Patrick’s Club emerged the winner and runner-up respectively.

The Walkeshwar resident started playing chess at the age of four at the nearby South Mumbai Chess Academy (SMCA). “She used to come to SMCA with her elder sister. Her parents noticed her patience to sit for long hours while solving puzzles and that’s how she started training in SMCA,” said FIDE Master Balaji Guttula, chief coach of the academy.

“She competes with older people in the academy. Her patience suits the game. Even if she is playing Rapid Chess, she must make moves on impulse, and for that, she must practice for long hours. She will now prepare for the U-7 state championship to be held in Mumbai this August,” Balaji added.

Ahana is supported by her parents who ensure her participation in big tournaments outside Mumbai and the country.

“She is very talented and has been playing chess from the age of four. She has been actively participating from one and half years and winning tournaments,” Durga Nagesh Guttula, Joint Secretary of Mumbai City District Chess Association (MCDCA), said.