‘Ultra’ side of life

Milind Soman is not the only Indian to win the Ultraman title in Florida. Meet his ‘ultra’ buddy from NCR. 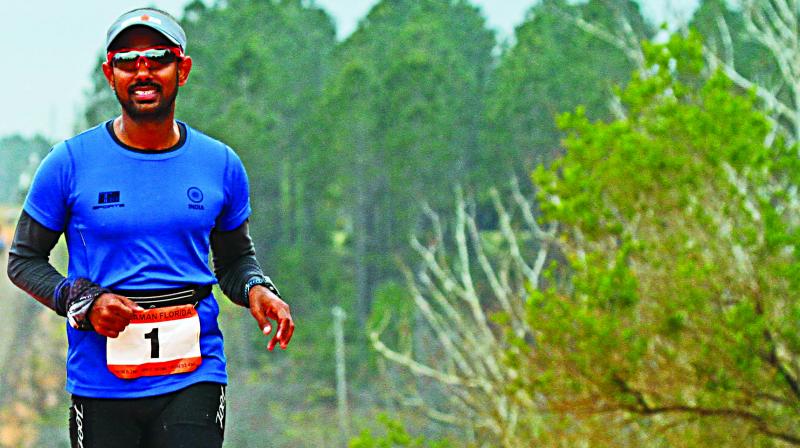 For the millennials, Milind Soman has always been an iconic figure. First, the actor captured their imagination as kids, playing the superhero Captain Vyom and now as a 51-year-old, he is giving them major fitness goals by winning one endurance race after another. After earning the title of Ironman, he can now boast of being an Ultraman as well. But he was not the only Indian to achieve this feat in Florida recently. The title was also won by Gurgaon’s Abhishek Mishra, Pune’s Kaustubh Radkar and Prithviraj Patil along with NRI Manmadh Rebba.

We spoke to Abhishek, whose lean physique can make you wonder how he can win titles like Ironman twice and now Ultraman. He was a regular corporate employee, who one good day decided to leave his job and pursue endurance sports. He went on win the title of Ironman, which entails completing a triathlon consisting of 3.8 km of swimming followed by 180 km of cycling followed by 42.2 km of running, and all of this within 17 hours to earn the title. The 31-year-old Gurgaon resident, who is originally from Varanasi, tells us, “Post-Ironman, I was searching for some event where I could explore my mental and physical limits and I found out about Ultraman. I had developed a great love for triathlon because of the different sports involved in it and hence decided to try for Ultraman. Also unlike Ironman, it’s not an open event and one needs to get an invite. When I got the invite I got to know that only 2 Indians had done it before. And now less than 10 Indians in the population of 125 crore have that title and I am one of them. It feels amazing. The feeling of running and crossing the finish line with the tricolor made me emotional. It was a breathtaking moment.”

Ultraman is a three-day endurance race which involves swimming, cycling and running with a time limit of 12 hours every day. Like Ironman, whosoever finishes the race in time wins the title. Abhishek swam 10 km in 6 hours and cycled 150 km for six hours on Day 1, and followed it up with 272 km of cycling in 12 hours on Day 2 and 84 km of running in 12 hours on Day 3 to add the Ultraman prefix to his name. “I am going to train more to finish the race again with better timings just like I had participated in Ironman a second time to improve my timings,” he says.

The year Milind won his Ironman title in Switzerland, Abhishek won his in Spain. Over the years, they both have shared a great rapport and the fact that they could become Ultraman together, overwhelms Abhishek. “We are good friends and we love training and running together. When I told him that I am planning for Ultraman, he revealed that he too was planning to participate and hence we both registered together. He is like my teacher, not just in fitness but in life. We both have this unabashed love for endurance sports and firmly believe that it can transform lives,” he says.

Abhishek credits his crew members Suzy and Linda for helping him achieve his long-term goal. But a freak accident on the third day almost ruined his plans. “On the third day, I was running against the traffic as per the rule. I saw cars coming and kept signaling them to keep some gap for me to pass. Suddenly I realised that one guy was coming very fast and not responding to my signals. I tried going off the road but twisted my right leg and fell on the ground hurting my jaw. It started bleeding and my bone just above my ankle was also badly hurt. My crew members called for medical help as the pain was unbearable but I didn’t want to land up in hospital just a few hours before the finish line. I had completed two days and it was only 10 miles to go on the last day. So I taped the swollen area and held a cloth piece in my mouth to prevent me from shouting in pain. I finished the distance in time,” says the now Ironman and Ultraman who considers endurance sports his way of meditation and urges people to run not to win titles but to stay healthy.

A few months back, he ran from Ashram to Ambience Mall in Gurgaon to show that one can cover that distance faster than a vehicle during peak hour.