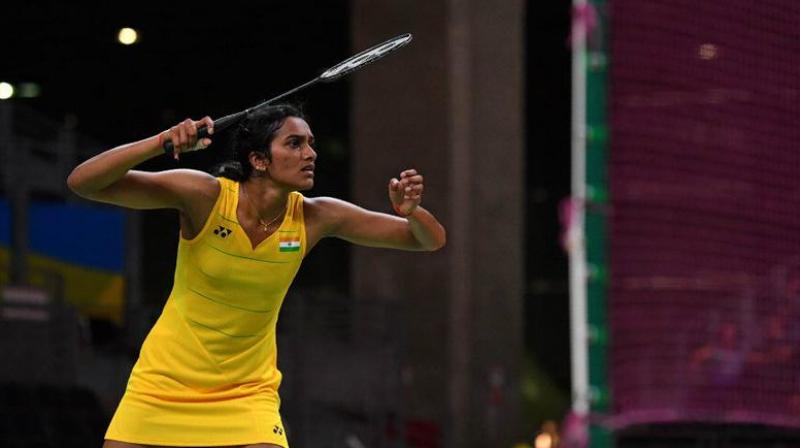 PV Sindhu will look to come up with a good show at the Hong Kong Open to qualify for next month's Dubai World Super Series Finals. (Photo: AFP)

Kowloon: PV Sindhu is now looking to come up with another good show at the Hong Kong Open, after clinching her maiden Super Series Premier title at China Open. The Olympic silver medallist is hoping to qualify for next month's Dubai World Super Series Finals. The Hong Kong Open starts on Tuesday

A two-time bronze medallist at the World Championship, Sindhu had a fantastic season this year as she became the first Indian woman to win silver at Olympics and then lifted her maiden Super Series title at Fuzhou, China on Sunday.

The winner of a Super Series Premier event wins 11000 ranking points and considering that Sindhu had lost in the second round at China Open and opening round at Hong Kong Open last year, she has a great chance of sneaking into the top eight Dubai Destination ranking if she can play well here.

Interestingly, if Sindhu (27,490 points) can come up with a good show then she might dislodge Saina Nehwal (35,420 points) who is currently at the eighth place at the Dubai Destination ranking and qualify for the prestigious event.

"I am looking forward to a good performance at Hong Kong.

I don't know much about the ranking points. Right now there is another tournament to go and I am concentrating on the Hong Kong Open and I hope to do well there," Sindhu told PTI.

While Sindhu will open her campaign against Indonesia's Lindaweni Fanetri, Saina, who has recently recovered from a knee injury, will face familiar foe Thailand's Porntip Buranaprasertsuk, who had beaten her in the opening round at China Open last week.

After a gruelling rehabilitation program following her knee surgery, Saina was back on the court at China Open and played a hard-fought three-game match against Porntip, which was her first match since exiting at the second round at the Rio Olympics.

Saina was happy to be back to playing at the highest level again.

"Lost in three sets .. against world number 13 from Thailand. So happy to b playing again at the highest level," Saina had tweeted.

The London bronze medallist will look to put the best foot forward when the USD 400,000 Superseries event starts with the qualifiers on Tuesday.

In men's doubles, Manu Attri and B Sumeeth Reddy, who played at the Rio Olympics, will be up against Korean pair of Solgyu Choi and Ko Sung Hyun.