We would have won the final: Indian Oil coach

Hockey coach Devesh Chauhan feels the team could have lifted the trophy if the finals had not been washed out because of the rains. 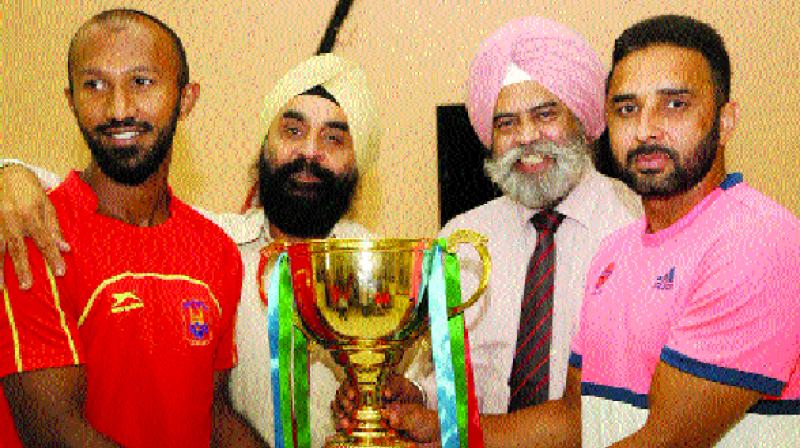 Incessant heavy showers that lashed the city on Tuesday forced the organisers, Mumbai Hockey Association Limited and tournament director, Mahesh Kumar to take the decision to share the trophy between Indian Oil and South Central Railways and also split the total prize-money of Rs 3 lakh.

Former India goalkeeper Devesh Chauhan, who was coaching the Mumbai-based hockey team Indian Oil who emerged joint winners at the 13th PMC Bank Guru Tegh Bahadur Gold Cup, said the team was confident from the start of the tournament. The team was unbeaten all throughout the competition and had to settle for being joint winners after Tuesday’s rains washed out the final.

Incessant heavy showers that lashed the city on Tuesday forced the organisers, Mumbai Hockey Association Limited and tournament director, Mahesh Kumar to take the decision to share the trophy between Indian Oil and South Central Railways and also split the total prize-money of Rs 3 lakh. “We were positive after defeating Punjab Police and we could have emerged as champions but nonetheless, congratulations to the South Central Railways team,” says Chauhan.

The astroturf ground at the MHAL-Mahindra stadium was waterlogged and with no respite from the rain the tournament director, after holding consultations with MHAL president, Mangha Singh Bakshi and general secretary Ram Singh Rathor, took the decision to abandon the match even before the players could take the field.

The Indian Oil outfit had a smooth tournament but the team was nervous when they faced Punjab Police, which had big names in the likes of Gurbaj Singh and Dharamvir Singh.

“Even when we were 2-1 up in the game, we felt the match could slip away because of boys were intimidated against such a big opposition. After the third goal we were on top, the match was ours for the taking,” recalls Chauhan, whose team eventually won the game 4-1.

“Many of our players are not available as they are training at the Indian camp. We trusted our young players and they showed great nerve to showcase their talent. Vikrant, who was our goalkeeper, is a great prospect along with Piyush Prakash, who is from Mumbai. The talent pool has been great in Mumbai over the years and the grounds are also top class. I think it is nice that Mumbai keeps organising tournaments to nurture talent,” he further adds.

Indian Oil had defeated Punjab Police, Jalandhar 4-1 in the first semi-final on Monday to make their third entry into the final of this tournament. They had finished runners-up in 2003 and 2008. Meanwhile, South Central Railway, who had lost to Army XI in the 2014 final, got the better of the same opponent (Army XI, Bengaluru) 3-2 in the second semi final.

“The good thing about Indian Oil is that they always give a chance to their employees and encourage them to come out and pursue their sporting endeavours,” says Chauhan, who was awarded the Arjuna award for contributions to hockey.