India’s best ever show at the Worlds had been in 2015 when they clinched 12 medals including four gold. 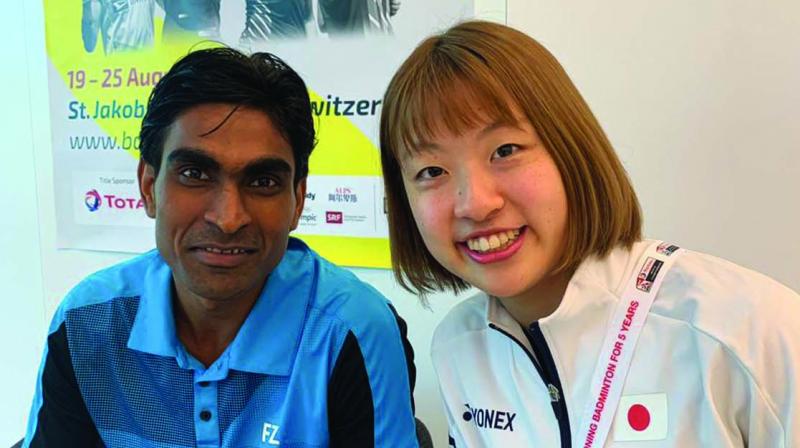 Para badminton star and world no. 1 Pramod Bhagat with Japanese world champion Nozomi Okuhara in Basel, ahead of the BWF World Championships.

India fielded a strong 24-player team and are expected to be among the medal contenders in the championships besides powerhouses Indonesia, China and Japan.

India coach Gaurav Khanna was confident of a good show from his wards and is hopeful of a better show than last championships in 2017, when they won 10 medals including two gold.

“I am expecting our medals tally in double digits. Besides winning medals, I am also anxious about our qualification for 2020 Tokyo Paralympics. Few of my players are in big lead already and I wish they can increase the gap here,” the coach said.

India’s best ever show at the Worlds had been in 2015 when they clinched 12 medals including four gold.

As many as 300 para badminton stars from around 50 nations will be in action this week in Basel which will also play host to the abled-body World Championships simultaneously. In fact, this is for the first time that both the championships are being held together, a unique way to bring equality in both the categories and promote para badminton among the masses. The sport will make its debut at the Tokyo 2020 Paralympics next September.

Bhagat, Tarun aim for better show
The Odisha-born shuttler Bhagat, who was recently nominated for the prestigious Arjuna Award, is looking to continue his amazing form that has seen him clinching four gold medals in five tournaments in 2019. “I will try to turn my 2017 bronze into gold this time. The competition looks strong but I believe my experience and winning confidence will play a big role in my matches,” Bhagat told the Paralympic Committee of India.

The former world champion is expected to face England’s Daniel Bethell and Indonesia’s reigning champion Ukun Raekendi in his path to glory. “Bethell will be my main contender,” Bhagat added. His compatriot Manoj Sarkar will be another tough contender and should make some noise.

The men’s SL4 should have another Indian Tarun Dhillon, an Asian Para Games gold medallist, fighting it out against World no. 1 Lucas Mazur from France for the gold, in a repeat of the 2017 Championships final.

India will also have the likes of Sukant Kadam and Suhas Yathiraj looking to make some impact, even as Indonesian Fredy Setiawan can’t be ignored. Yathiraj and Kadam could be the dark horses and spring surprises.

With Tokyo 2020 Paralympic qualification points at stake, Tarun knows the importance of doing well at the event: “I hope I can take one step further this time and earn my ticket to Paralympic Games 2020. I have been training hard all these years,” he said.

Nagar’s Golden Dreams
Krishna Nagar will be another name India will have high hopes on for a gold. Like Bhagat, Nagar had a terrific year, having already won 10 medals in 2019, in the men’s SS6 event. “This year has been very good. I want to continue with that momentum at the world championship. Obviously, my target here is the gold but I don’t want to think too much and play one game at a time.”

However, British World No. 1 and 2, Jack Shephard and Krysten Coombs respectively, might spoil Nagar’s golden dreams. He needs to watch out for the two tough challengers.

Among others, Korea’s world champion Kim Jungjun and Hong Kong’s bronze medallist Chan Ho Yuen is expected to fight it out for WH2 gold, while China’s promising star Qu Zimao will be among the mix in WH1 event. Indonesia’a Asian Para Games 2018 champion Dheva Anrimusthi and fellow player Suryo Nugroho will battle out for the honours in SU 5.

Parmer vs Joshi
In the women’s competition, India’s former world champion Parul Parmar will be the favourite for the gold in women’s SL3 event. She will be looking to maintain her stronghold in the category, having clinched double gold medals in women’s singles SL3 and doubles events in the 2017 championships.

Meanwhile, her compatriot Manasi Joshi will be eager to better her 2017 Worlds bronze this time around.

“I have worked very hard for the championship; I have been training three sessions a day and looking for a better performance in Basel. With 16 people in the group of WS SL3, the participation is the highest ever. Hopefully it will be a great competition,” said Manasi, who trains at Gopichand Academy in Hyderabad.

In other exciting clashes, Indonesia no. 1 player Leani Ratri Oktila will fight it out against her Chinese nemesis Hefang Cheng in women’s SL4, while Japan Ayako Suzuki will be favourite for SU5. Oktila will once aim for three medals.

In doubles events, the standing events are expected to be dominated by Indonesians with their fast-paced games and sharp strokes, while Koreans and Japanese should rule the wheelchair events.