Rahul Chaudhari and Sombir Shekhar were the architects of Telugu Titan's victory on Saturday night. 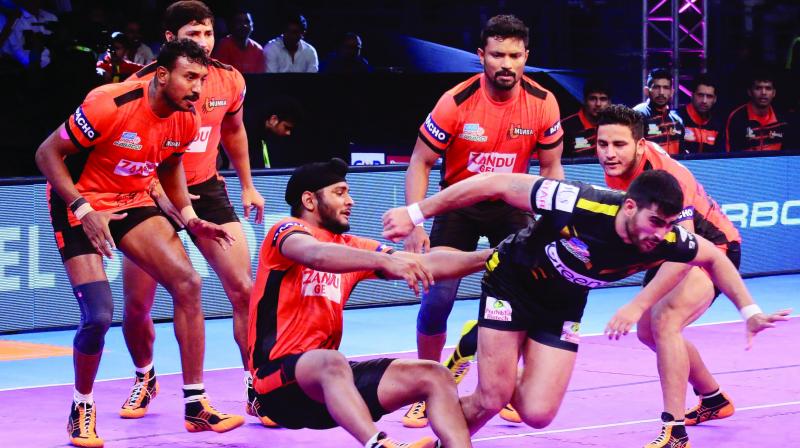 U Mumba tried to retain its strength in the second half of the game but failed.

U Mumba had a mixed luck in this weekend's Inter Zonal Challenge of Pro Kabaddi League. It rallied to beat hosts UP Yoddha 37-34 in a thriller but allowed Telugu Titans to prevail 37-32. U Mumba will now resume the challenge at NSCI's Dome from Friday.

Rahul Chaudhari and Sombir Shekhar were the architects of Telugu Titan's victory on Saturday night. Chaudhari scored 13 raid points whereas Sombir scored eight tackle points. U Mumba tried to come back in the second half but faltered during critical moments. It was Telugu Titans second win of the Pro Kabaddi League whereas U Mumba suffered its fourth defeat of the season.

U Mumba was the better team in the early few minutes as it led 4-2. Chaudhari scored with a three-point raid in the fourth minute as Telugu Titans led 5-4 before inflicting an all out in the ninth minute to lead 12-7.

It was all Telugu Titans in the first half as Chaudhari continued to pile on the raid points. Anup Kumar tried getting U Mumba back in the game but trailed 15-19 at the end of the first half.

Telugu Titans opened a nine-point gap in the 27th minute to lead 27-18. U Mumba got back in the game as its raiders and defence got its act together. It went on an eight-point run as it tied the game at 27-27 in the 32nd minute. In the 30th minute, it also inflicted an all out on Telugu Titans.

It seemed like Telugu Titans had run out of steam. But Chaudhari scored with a two-point raid in the 31st minute as Telugu Titans led 31-28. Sombir was colossal at the back for Titans and scored seven points in the first 30 minutes.