'My sister is blackmailing me for Rs 25 lakh', says sprinter Dutee Chand

Dutee's elder sister Saraswati Chand on Monday, told that the sprinter's partner "pressurised and blackmailed" her for wealth and property. 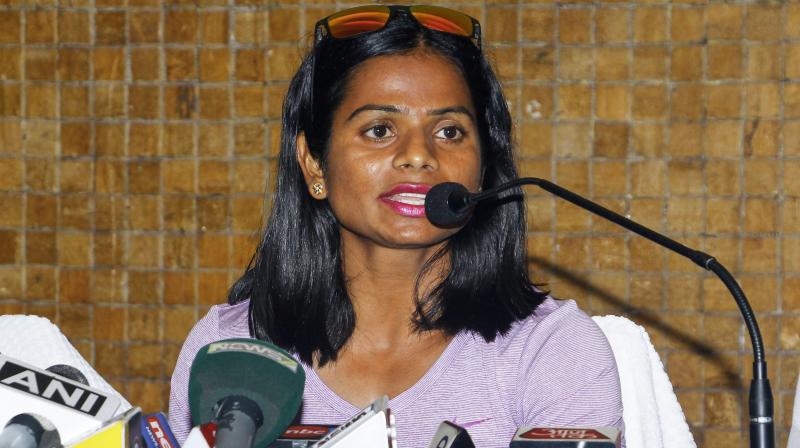 Dutee, who has been hailed for her revelation, is facing a tough battle of acceptance in her family. (Photo: PTI)

Bhubaneshwar: Two days after sprinter Dutee Chand disclosed her same-sex relationship, the athlete on Tuesday alleged that she was forced to come out with the revelation as her sister was blackmailing her for a sum of twenty-five lakh rupees.

"My own sister is blackmailing me, she asked me for Rs 25 lakh. She had once beaten me, I'd reported to the police. Since she was blackmailing me, I was forced to come out about my relationship," said the Asian Games medalist.

Dutee's elder sister Saraswati Chand on Monday told ANI that the sprinter's partner "pressurised and blackmailed" her for wealth and property.

"With great sorrow, I have to say that the decision taken by Dutee [to disclose her same-sex relationship] is not of her own. She's been pressurised and blackmailed into marriage by that girl and her family. All of this has been done to grab the property and wealth of Dutee," Saraswati Chand, elder of Dutee, said on Monday.

"Dutee's life and property are in danger. That's why I request the government to provide protection and security to Dutee," she had added.

Dutee, who has been hailed for her revelation, is facing a tough battle of acceptance in her family. On Monday, her mother Akhoji Chand told ANI that it was not possible for her to accept her daughter's relationship status.

"Dutee wants to marry a girl, who is the daughter of my niece, so she is my grand-daughter. In this relation, Dutee will be like the mother of that girl. Then how will it be possible in our society in Odisha," said Akhoji.