A Fancy for fencing

Sharanya S. is an upcoming champion fencer from Kerala who has her eye on the Olympics. 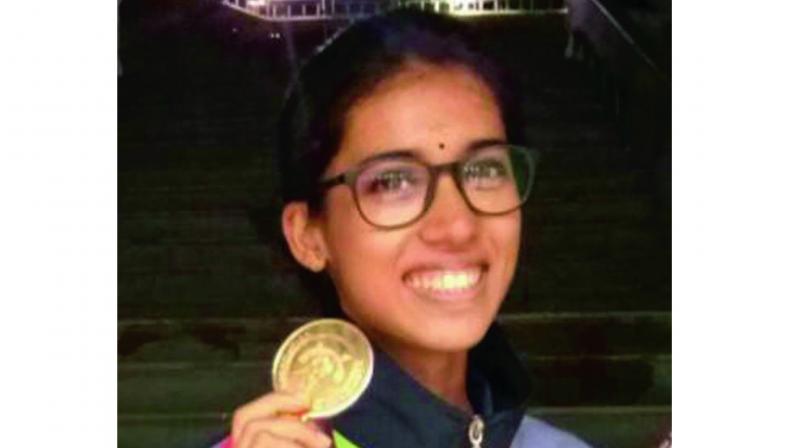 Loaded with studies and projects, you would think this college student would have time only for academics. But you are wrong. This 20-year-old Kochi girl is a rising star in one of the less popular sports of the country,  fencing. It is a highly competitive and strategic sport.  And you are most definitely going to hear the name Sharanya S. soon as she is bagging every trophy in the sport and reaching her goal of getting trained for the Olympic Games.

Fencing requires a high level of agility, endurance and concentration. When ready for combat, the fencer has to get started with a defensive posture, keeping a clear mind on when to hold back and when to wield the foil to score. Years of practice and proper guidance have made this all a child’s play for Sharanya. Her victory in the recently concluded National championship underlines it.

She started her life on the fencing piste when she was a Class VI student. “For the first time, it wasn’t planned. It was the curiosity that took me to the fencing strip more than the love for the sport,”  Sharanya recalls.

The fencing only tells a part of Sharanya’s story though. She has been winning national titles in fencing, but this isn’t the only thing she is good at. She has a black belt in Karate, which has really helped to sharpen her endurance and agility in fencing. In a sport that can attract many egos, Sharanya has remained humble, hard working, and most importantly  enjoying it. She is also very passionate about singing and would like to be a good singer.

Many would contend that “practice makes perfect” is already a cliché, but it still holds true for many. Sharanya sacrifices her social time and spends hours in practice. This has paid off as she won medals in the last five years at the national level and a bronze medal in the All-India University Championship. Apart from allocating time for practice, she travels frequently to attend different competitions. All at the same time, she still managed to perform equally well in her academics, having been a student of second year Psychology at Union Christian College, Aluva. When asked about the current scenario in Kerala towards this sport, she opined, “Things have changed a lot here in our state and we are the hot favourites for national games in the country. In the recently concluded national championship, my fellow fencers and I won nine medals. Now we are getting very good support and the Kerala government is also very supportive”.

The Kerala government has initiated a programme to make sure its athletes are getting cutting-edge training before the next Olympic Games and Asian Championships. The fencing team is also a part of the training sessions.

Following in the footsteps of Sharanya, her little sister has also started training in fencing. “She is very enthusiastic about the sport and I am sure she will be a great fencer in the future. Training with her makes me happier,” says Sharanya.

At the Rajiv Gandhi Indoor Stadium, Sharanya, specialised in the category of foil, is training hard under the guidance of Sheeja

V.K., who is a former national gold medalist. She lives in Vyttila with her father Kishore, mother Sreekala and sister, the Class VI student and fencer Sharika.