Leading from the front

The Puneri Paltan skipper has tackled many hardships to come this far and realise his dreams. 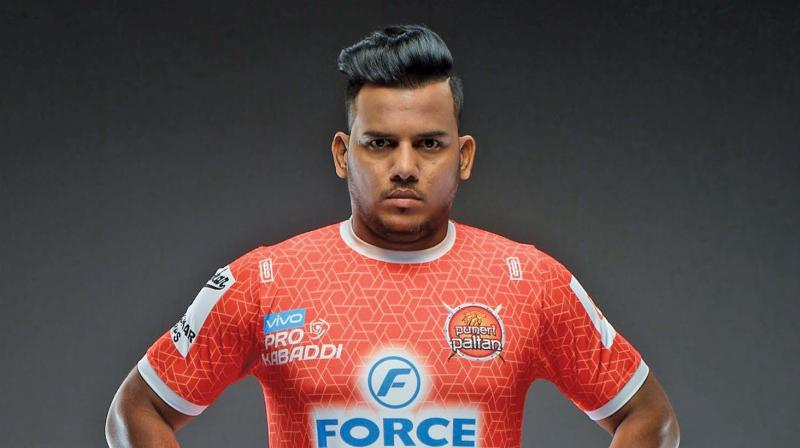 Girish Ernak has come a long way since his physical education teacher, Sunil Koli put him in the kabaddi team without his knowledge, back in his school days. He is now successfully leading the Pro Kabaddi League franchise —Puneri Paltan this season and has played for India only recently. The road has been full of hardships for the Kalyan lad who once used to sell newspapers to meet his training and nutrition expenses.

“My PT teacher, Sunil Koli suggested my name for one of the Inter-School Kabaddi Tournaments without my knowledge. I had never played the sport before and I was nervous, but he had immense faith in me. I was mesmerised by the charm of the game and till  10th standard have played numerous taluka level and district level kabaddi tournaments for my school team,” he said.

After SSC, Ernak joined ‘Om Kabaddi Sangh’ in Kalyan — an academy that has given the nation some wonderful Kabaddi players. “Santosh Padwal sir of Om Kabaddi Sangh taught me a lot about the game and its techniques. One of Maharashtra’s popular Kabaddi players — Prashant Chavan Dada spotted my talent and registered my name for Thane district games. Playing in Thane district games, gave me the opportunity to play in Air India’s Kabaddi team which has produced the finest of Indian Kabaddi players like Ajay Thakur, which gave me immense confidence and improved my game,” he added.

The road was tougher for the promising defender here on but he was in no mood to give up before adversities.

“My parents have been my pillar of strength throughout. I come from a very humble background. My passion for the game kept me going and I decided to earn and learn. I started distributing newspapers in the morning to support my training and dietary requirements. I used to walk five kms to reach my Kabaddi club in Kalyan,” he explains.

When Pro Kabaddi League commenced in 2014, Patna Pirates captain Rakesh Kumar, recommended his name to the management and he represented Patna Pirates for the first two seasons of PKL as left corner. Pratap Shetty who was the coach of Bengal Warriors team took notice of his talent and offered him job with his current employer, Bharat Petroleum (BPCL) and picked him up to play for Bengal Warriors in season 3 and season 4.

In season 5, he was bought by Puneri Paltan in the auctions and was retained by the franchise for Season 6 and announced as captain. He also represented India at international level.

“I was selected for Kabaddi World Cup 2016 camp however could not make it to the final twelve. This hurt me a lot, I started practicing even harder. Kabaddi Masters Dubai 2018 was a wonderful opportunity and I grabbed it and made it to the final team. I was selected to play for India at the Asian Games 2018. The feeling of wearing the Indian Jersey was a dream come true for me. I will continue to work hard and get gold medals for my country,” he said.

Puneri Paltan had mixed season so far, but they are currently third in Zone A behind U Mumba and Gujarat Fortunegiants.

“It is my first stint as a captain in Vivo Pro Kabaddi League and it has been a wonderful learning experience. It is very important for a captain to be able to stay calm on the mat to guide the other players. Kabaddi is a dynamic game and every 30 seconds the game changes and so does the strategy. As critical as it is to devise a pre-match strategy, it is important to devise strategies during the match as well. I have learnt a lot about keeping calm during crunch situations and holding the team together which is vital in any game. I share a very good rapport with all my teammates and that dynamics has been beneficial for us on mat during matches.”

“I cannot express in words the feeling of winning a gold in the senior nationals for Maharashtra state after 11 years. It was a proud moment for us as Kabaddi is Maharashtra’s favourite sport and the state has produced some great Kabaddi players. Kabaddi is a popular game in Maharashtra and it is great to see Maharashtrian players taking charge and leading from front. In Vivo PKL season 6, all Maharashtrian players like Rishank Devadiga, Kashiling Adke, Vishal Mane, Shrikant Jadhav, and Siddharth Desai are doing very well.”

Paltan’s own Akshay Jadhav, Gurunath More and Shubham Shinde have put up some spectacular performances in the league. As the saying goes, little drops of water make an ocean. In the same way, all of us together are contributing towards development of Kabaddi in Maharashtra in our own little ways,” he said.