Belihu gave credit for his success to Ethiopia’s Guye Adola, who created a course record of 59:06 in 2014 here. 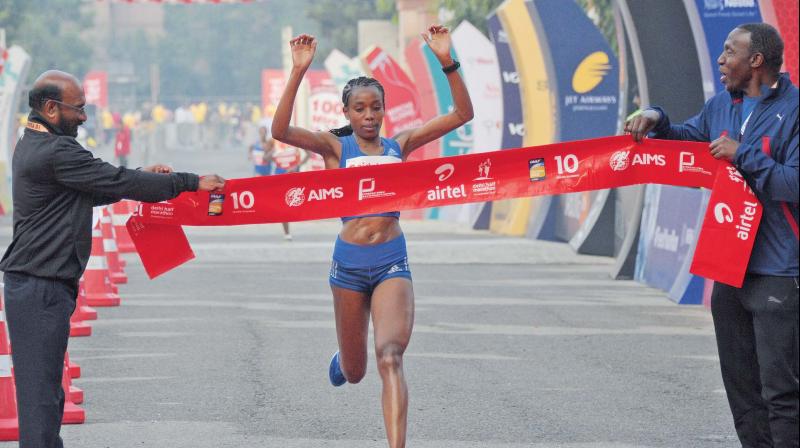 New Delhi: Rio Olympics and world 10,000m champion Almaz Ayana made a successful debut on the road, clinching the Airtel Delhi Half Marathon elite women’s title with élan on a chilly but bright Sunday morning here.

In the men’s elite category, it was again Ethiopia boys who dominated the podium taking the first two spots. Berhanu Legese retained his crown in 59 minutes and 46 seconds. Andamlak Belihu came in five seconds later on his debut over the distance and America’s Leonard Korir was third with 59:52. IAAF world championships marathon gold medallist Geoffrey Kirui came a cropper as he finished a disappointing sixth. In 2016, he was fourth.

“I cannot explain the happiness I have after winning the crown here again. The conditions out there were good and I will definitely be back next year,” said Legese, who also won the crown in 2015.

Belihu gave credit for his success to Ethiopia’s Guye Adola, who created a course record of 59:06 in 2014 here.

“It was a good timing for me. I trained under Adola that’s why I came with such timing and his advice really helped me,” Belihu said with the help of a translator.

Top three athletes were neck-and-neck till 15 kilometres but thereafter Legese tried to sprint and it brought in the desired results.

He pushed hard and after the 18-kilometre mark, managed to distance himself from the rest. He carried on the momentum till the end to win the crown.

This being her first outing on the road, women’s champion Ayana overcame early jitters as she got confused after pacemakers dropped out and language too being a barrier as she was unable to communicate. But the world champion defied all odds to reign supreme.

“I was a bit nervous and confused, not knowing what to do, whether to follow other runners and to take the lead. The course was very good but the chilly weather created some problem. I could have run a faster time,” she said.

Rawat, Surya Set new course records
It was a successful day for the home athletes as new course records were created in both categories. Armyman Nitender Singh Rawat took the top honours in the Indian elite men’s category with new course record of 1:03:53 pipping defending champion G. Lakshmanan by a mere fraction of seconds. Rawat was the only Indian in the elite men’s overall top 10.

In the women’s category, L. Suriya clinched the top spot with 1:10:31 and in the process, smashed the course record of 1:10:52, set by Lalita Babar in 2015. With this the 27-year old from Tamil Nadu’s qualified for the IAAF World Half Marathon Championships in Valencia next March, which would be her first global championship outing.

Overall Surya, who is the sister of Laxmanan, came eight while Sudha was tenth.