Captains of the 12 teams in fray expressed confidence going into the event at the trophy unveiling function on Friday. 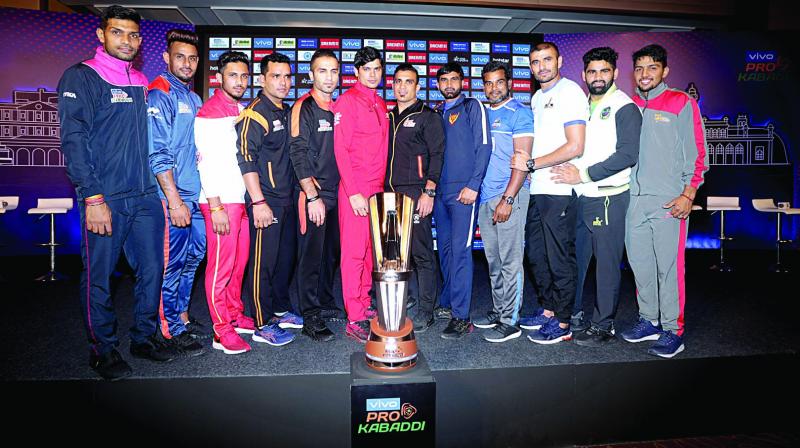 Captains pose with the Pro Kabaddi League trophy in Hyderabad on Friday, ahead of the season opener.

Hyderabad: All is set fro the seventh season of the Vivo Pro Kabaddi League which will kick off with home favourites Telugu Titans taking on U Mumba followed by defending champions Bengaluru Bulls clashing with three-time winners Patna Pirates at the Gachibowli Stadium here on Saturday night.

Captains of the 12 teams in fray expressed confidence going into the event at the trophy unveiling function on Friday.

Host skipper Abozar Mohajermighani was upbeat about the opener. “We are the strongest team in the competition,” he boasted, adding “Our team composition is made up of strong raiders, a strong defence line and good coaches.”

“Our players are fit and have been practicing continuously for the tournament. We will have a plan to approach every match and aim to win one match at a time. Our performances in the previous years have been strong and I hope we are able to make it to the semifinals this year,” Abozar added.

He won’t have it easy though, going by Fazel Atrachali, U Mumba captain. “We fought hard last season and we will continue to do the same this year as well,” he said.

“Having Sidharth last season was a big plus for us, but this season also we have youngsters who have shown the same dedication and promise as Sidharth. We know Sidharth well and do have a plan to tackle him in the game tomorrow,” he added.

Next up was Rohit Kumar, Bengaluru Bulls captain. “All teams are extremely competitive, but I believe Gujarat Fortunegiants and Tamil Thalaivas are our strongest competitors this season,” he said.

“The 45-day long camp has made us train and practice extremely hard and with that intensity we will prepare for the match against Patna Pirates tomorrow and give our 100 per cent and try to get off to a winning start,” he added.

Patna Pirates leader Pardeep Narwal too was full of beans. “We’ve won the championship thrice and we will do it again this season. We are a strong and balanced side and there’s nothing that will stop us. Personally, I’m also working on some new moves which you’ll see on the mat in our opening game,” he said.