The Vadodara girl was present in Mumbai at opening day of ‘Red Bull Cart Fight 2017’. 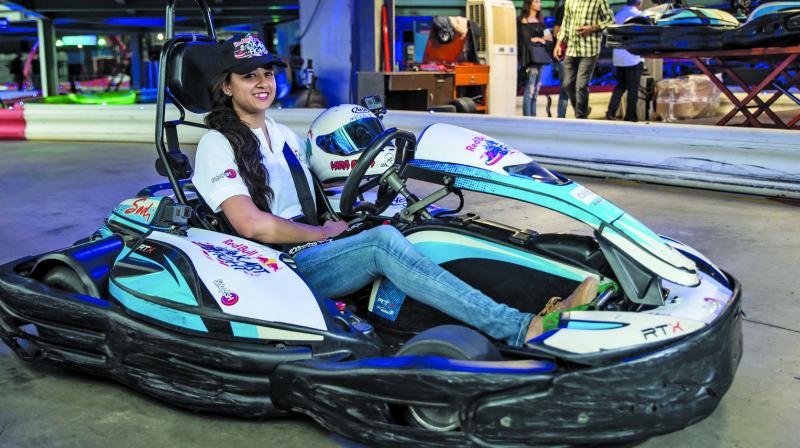 The 17-year old have been dashing the roads since 8 years and she acknowledges her father and her coach for her immense success.

Mira Erda, 17, is the first Indian female driver to compete in the Euro JK Series championship. One of the highest classes of Formula racing in the country, the Euro JK series is part of JK Tyre-FMSCI National Racing Championship. The Vadodara girl was present in Mumbai at opening day of ‘Red Bull Cart Fight 2017’.

“I started racing from the age of 9 as my father owns a Karting track and back then I just did it for fun. Later, I went to see some national races in Pune and then my interest started developing. In 2012, when I competed in All Stars Race, I gained more confidence and now I am eyeing Formula 1 in the coming years,” says the racer who is currently studying in her 12th grade.

As she talks about her journey being the only girl in the men’s game she expresses, “Initially there was some pressure and many times I had to prove myself but I did not let these small things come in my way. Now that I have made a name in the field, I don’t face anything of such sorts.”

“There are a lot of girls in Vadodara who are inspired after seeing me and I am really overwhelmed that I can encourage people,” she adds.

Talking about the event, she  says, “Red Bull Kart Fight is the perfect platform for aspiring racers in the country to test and showcase their racing skills in a safe and confined environment. I wish all the drivers the best and hope to see a lot of girls pushing pedal to the metal at this tournament.”

The 17-year old have been dashing the roads since 8 years and she acknowledges her father and her coach for her immense success. “My father has been my pillar of strength since day one. They wait for me to come home and discuss my race. My coach Akbar Ibrahim, who has trained me with patience and has guided me to be the best,” Erda said with her father by her side.

Discussing her future Mira says, “I want to get a degree in Sports Management so that I can contribute to sports even when I am not at the field. My dream is being the first Indian female driver in the Formula 1 racing.”