Living life one marathon at a time - Sunil Shetty

The 55-year-old Powai resident returned from the oldest marathons in the world with yet another story. 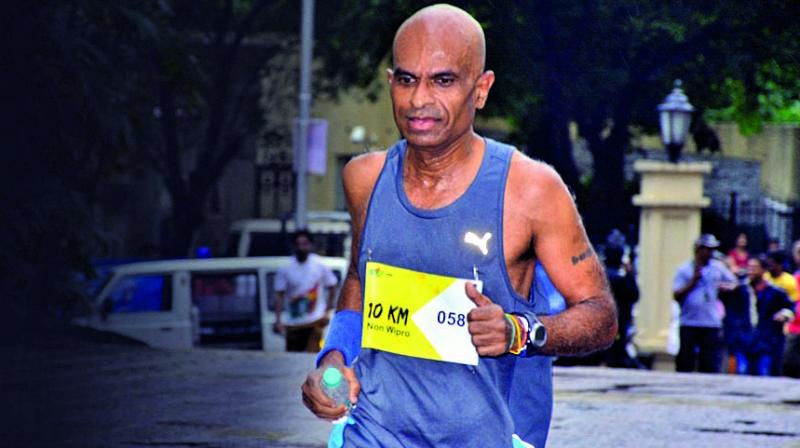 An incident happened, I stepped on the reflector and fell. I cut my left knee and it was very painful but quitting was not an option. sunil shetty marathoner

Sunil Shetty is not a usual marathoner. Never has he taken part in a race for an award or a medal (not that he cannot). Every time that he is on the tracks, he runs to collect accolades for himself. He added another ultra-marathon to his list in the name of Comrades Marathon in the KwaZulu-Natal Province of South Africa accounting to 90 kilometers.

The oldest ultra-marathon in the world had its 93rd edition on June 10 with around 20,000 runners. The finishing cut-off was 12 hours.

This race had been on his bucket list for almost a year and it was not the easiest of task for the Powai-resident to finish it. He clocked 10 hours 13 minutes and 11 seconds but it could have been much lesser.

Seconds after he crossed the 45 km mark, the 55-year-old runner stumbled and sustained a deep cut on his leg. At that moment, he was not sure about what he should be doing. He had three choices infornt of him: to find medical help, to keep running or quit the race. He chose to continue his run.

“The doctors were present there but I thought if they dress me up, it will take 30-40 minutes. I had already completed the first half (45kms) early. It was also the tougher part since the weather was quite chilly,” he recalls.

What kept him going after getting wounded? It was long months of training and know-how. For someone who has been running for almost half of his life, Sunil did not want to hand it over.  “I am not someone who gives up easily.  But an incident happened just after I had crossed the 45km mark. I stepped on the reflector and fell. I did cut my left knee and it was bleeding and it was very painful but quitting was not an option,” he says.

“This race was in my mind for a very long time since it is the oldest ultra marathon in the world and had read that about the toughness about the course, which generated interest in me. I trained hard for 6 months and l clocked almost 1500k in training,” he adds.

The race flagged off from Pietermaritzburg and ended at the Durban Beach. Numerous hamlets are bypassed with highways that are either uphill or downhill as Shetty describes, “The route was challenging because of the highway. It wasn’t a curve. You had to go up or down.”

He could not finish the race with his desired time of 9 hours and 15 minutes but Shetty’s finish time is something that he can be pleased with considering the mid race crisis. He eventuall went on to earn a bronze medal.

He returned to Mumbai a couple of days after the race. He even lives his life like a marathon- does not stop even for a day. Shetty was the race commissioner for the IDBI Federal Life Insurance 24 hour Stadium Run that commenced over the weekend.