A part of India’s gold winning women’s squad at the CwG, paddler Madhurika Patkar recalls her journey bottom to top. 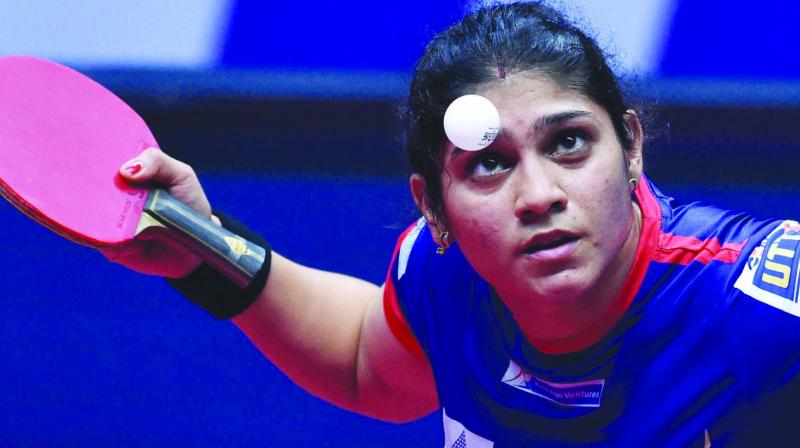 Several sessions with her therapist and still there was no notable difference in Madhurika.

Dreams often turn into nightmares and the same dreams can transform into a fairytale. Paddler Madhurika Patkar returned to a “grand reception” after her heroics at the Gold Coast Commonwealth Games. But she goes back to her rather forgettable memories from the 2014 campaign, which had left her with an immense determination to grow stronger and bounce back vigorously.

Back then in Glasgow, the women’s table tennis team crashed out in the semi-finals and failed to secure a bronze medal even in the match for the third position. “It haunts me every time,” says Patkar. She still gets flashes of the game where she lost in the third round to Australia’s Jian Fang Lay in the single’s match a few days after the loss in the team event against the same opposition.

Several sessions with her therapist and still there was no notable difference in Madhurika. Something similar happened with her this time as well in the team event final against Singapore’s Mengyu Yu. In the best of five matches, Manika Batra took India to 1-0 but Patkar was unable to cope with Yu and it became 1-1 again.

“I could see something similar happening to me. I was only going back to the match against Australia,” she recalls. But eventually, she redeemed herself in the doubles match with Mouma Das to hand India a tough 2-1 lead, which was made 3-1 by Batra to get the team to a gold.

“You have to believe in yourself in such situations. I was sinking back into the old nightmares but I also saw a young Manika coping with the same amount of pressure and that inspired me. The doubles win in that match means a lot to me on a personal level,” she says.

From being a rookie at the 2010 Delhi CwG to a gold medalist, she has undoubtedly carved her way through to the big stage to taste the silverware this year. The journey could have been much smoother if the unnecessary roadblocks didn’t come her way.

Slump after 2010
As the 2010 CwG ended, India ended at the second position — a great record but the competition also ended with a massive scam at the same time. The athletes were highly affected in terms of funds and finances. “We were left on our own from 2010 to 2012, I think. There were no pro tours, no competitions. Most of us had our own coaches and the new coach before the Glasgow CwG (2014) couldn’t do much with us,” says Patkar.

“But more than the association or the coaching, I was disappointed at myself,” she adds highlighting the Australia matches.

In 2016, India could not even make it to the championship (first) division of the Table Tennis World Championship. TT had almost hit rock bottom then. The paddlers deserve a great deal of credit for the triumph in 2016 to beat Luxemburg and Brazil, respectively. The win secured India’s promotion to the gold division. “That was when we started believing in ourselves. The wins were a great boost for men and women. We started training harder and the emotions grew stronger,” as Patkar recalls.

The golden girls
“Gold at Gold Coast,” was the WhatsApp group title of the team before they left for Australia. In the team event, when one player played, the rest remained so animated as if they were playing the match. “That was the synergy that was needed to clinch the gold,” she says.

Before the Singapore match, the final words of the coach to the paddlers were, “You win the silver, it’s good and you’ll go back as fighters. But if you win the gold, you all will be heroes in the country.” Maybe that’s how Patkar managed to wash the blues of the 2014 loss even after going a game down. But what matters now is the gold medal hanging around her neck and the coming World Championships that commence from April 29 in Sweden.