Champion Marquez warms up in style

The Honda racer finished first day as the third fastest rider even as teammate Jorge Lorenzo made a step forward. 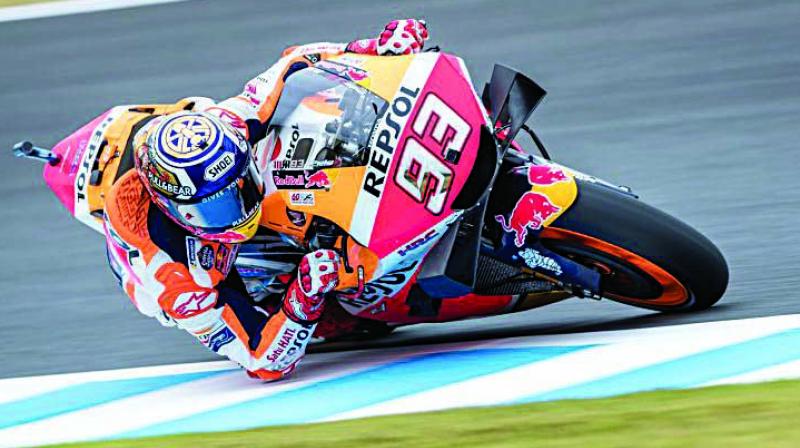 Spain's rider Marc Marquez of the Repsol Honda Team rides during a practice session at Japense Grand Prix on Friday.

Motegi (Japan): With the title already in his pocket, eight-time world champion Marc Marquez continued his consistent performance during the first free practice of the Japanese leg of the 2019 MotoGP Championships on Friday.

The Honda racer finished first day as the third fastest rider even as teammate Jorge Lorenzo made a step forward.

Cool conditions at the Twin Ring Motegi Circuit didn’t deter the local fans who filtered into the track from early in the morning.

A track temperature of 21 degrees Centigrade kept the riders some distance from the outright lap record in Japan but potential rain on Saturday meant they still had to push hard for a Q2 spot in the closing moments of Free Practice 2.

Fresh from being crowned the 2019 MotoGP world champion, Marc Marquez showed no signs of relenting his fearsome work ethic.

Working towards Sunday’s 24-lap race, Marquez was fourth in Free Practice 1 and improved his time by just under a second to go third on the combined time sheets.

The world champion is not resting on his laurels and is determined to find more speed on Saturday.

"The attention and the way to approach a weekend is the same. But, I must say that we struggled a little bit today.

We started with a normal pace but the feeling was not the best one. We tried to adapt the set-up of the machine to the circuit and it was a great job,” he said.

“I am clear with my mind and I always go out there and try to finish on the podium in all the races. And, that’s my first target here," he added.

"It is not easy as well to win the last four races because in some circuits the Yamaha will be very fast and in some the Ducati. But we need to focus and try to keep the momentum going. If we cannot win I will try and finish close to victory,” he said. The top honours on the opening practice session however, belonged to Yamaha as Fabio Quartararo finished at the top of the pile with teammate Mario Vinales a close second.