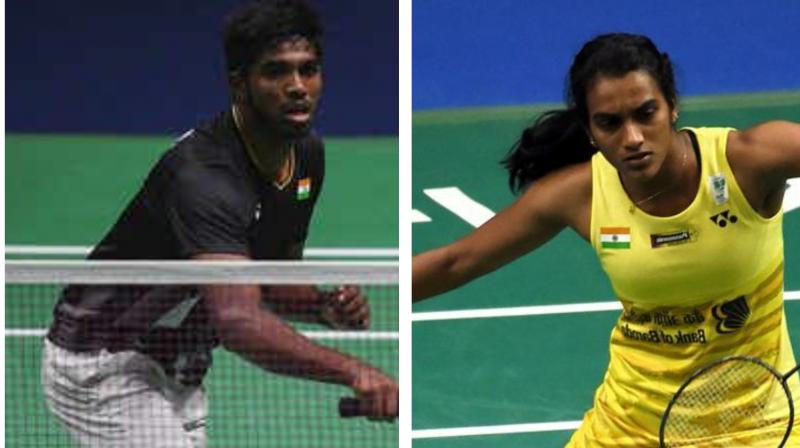 Reigning world champion PV Sindhu made an early exit from the China Open after losing a three-game thriller against Thailand's Pornpawee Chochuwong in the women's singles pre-quarterfinals here on Thursday. (Photo:AFP)

Changzhou: Reigning world champion PV Sindhu made an early exit from the China Open after losing a three-game thriller against Thailand's Pornpawee Chochuwong in the women's singles pre-quarterfinals here on Thursday.

Sindhu, an Olympic silver medallist, squandered a first-game advantage to go down 12-21 21-13 21-19 to Pornpawee in a match that lasted 58 minutes here.

Doubles specialist Satwiksairaj Rankireddy also had a dismal day as he suffered twin defeats, losing both the men's doubles and mixed doubles pre-quarterfinals.

In men's doubles, Satwik and Chirag Shetty, ranked 15th in the world, ran out of steam after a decent start against fourth-seeded Japanese pair of Takeshi Kamura and Keigo Sonoda and went down 19-21 8-21 in the second-round match that lasted 33 minutes.

This is the second time Satwik and Chirag have lost to the combination of Kamura and Sonoda this year. They had lost to the world no.4 pair at the Japan Open in July.

Satwik then paired up with his mixed doubles partner Ashwini Ponanappa but the duo couldn't get past Yuki Kaneko and Misaki Matsutomo, losing 11-21 21-16 12-21 to the Japanese pair.

Sindhu, who came into the match with a 3-0 lead against Pornpawee, dominated the first game as she lead 7-1 early on but the Thai shuttler reduced the deficit to 10-11 at the break.

However, Sindhu reeled off eight straight points after the interval to jump to 19-10 and eventually sealed the first game comfortably.

In the second game, Pornpawee changed gears and moved to a 5-1 advantage initially. Sindhu clawed back to 7-9 before the Thai youngster jumped to 15-7 with six straight points and held her fort to roar back into the contest.

The decider started on an even note as the duo fought hard, moving together till 6-6 when Sindhu surged ahead to enjoy a 11-7 cushion at the break.

However, Pornpawee kept breathing down Sindhu's neck and slowly moved to 15-19. From there, the Thai shuttler blasted six points to leave the Indian shocked.

Among other Indians in fray, Parupalli Kashyap and B Sai Praneeth will also be in action, while Ponnappa and N Siki Reddy will take on the second seeded Japanese duo of Misaki Matsutomo and Ayaka Takahashi in the second round of the women's doubles competition.