Advani expected some hostility from the home crowd as they kickstart the League on Saturday. 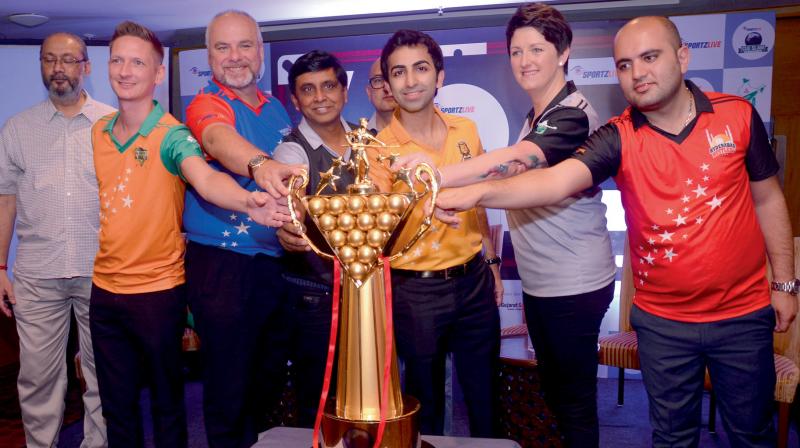 Icon players from their respective franchisees pose with the Cue Slam trophy after its unveiling in Ahmedabad on Friday.

The 16-time billiards (12) and snooker (four) world champion, Advani was happy the franchise based league has finally took off and will give a necessary boost to the sport. “I congratulate Sportzlive and Billiards and Snookers Federation of India for making it happen. It is a property, first of its kind franchise based league in cue sports. I like the concept, it is the shortest format of the game and it is going to be exciting and unpredictable.

“Each match will be over in an hour or so and it throws out slow play and tactics out of the window. There are 20 seconds for a shot and a frame can’t be beyond 10-minutes which will make it exciting for the viewers,” Advani said.

The league, which offers a total prize money of `50 lakh, will feature five teams — Gujarat Kings, Chennai Strikers, Hyderabad Hustlers, Bengaluru Buddies and Delhi Dons — and will culminate on August 25.

“These are very exciting times for cue sport and it will be boost for the game. I want to sit back, relax and enjoy the week, pocket the balls on the table. I am sure everyone will enjoy the week,” he added.

Advani expected some hostility from the home crowd as they kickstart the League on Saturday. “I expect some sledging from Gujarat fans and bit hostile crowd. It is very fast game and we are used to longer format. It is going to be exciting. Anyone can win any match and the tournament. There are no top seeds and favourites. This format is made to suit television audience and will generate lot of drama and upsets,” Advani who like many other players in the league is used to play in silence and take their time to take shots and strategise.