U Mumba ready for fireworks

The season TWO champions will launch PKL-7 campaign against Titans in Hyderabad on Saturday and will play home leg from next weekend. 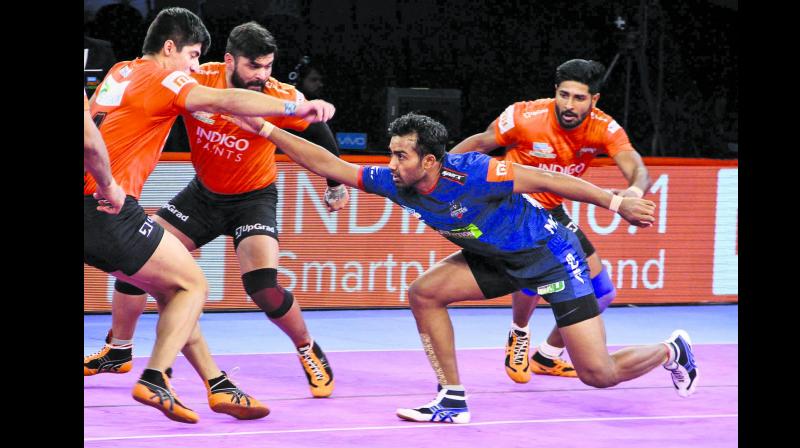 Both Desai and Mazandarani played a pivotal part in U Mumba’s exceptional campaign in the league stages last season before losing playoff (Eliminator) game against UP Yoddha.

The new season will see all teams play each other twice in a double round-robin format with Telugu Titans being the home team during the first leg. After first game, U Mumba will play first season champions Jaipur Pink Panthers on Monday.

Then the Fazel Atrachali led side will return home to play four matches at DOME@NSCI SVP Stadium from July 27 until August 2 against Puneri Paltan, Bengaluru Bulls, UP Yoddha and Gujarat Fortune Giants.

Last season they had a remarkable campaign at home before losing last two games. The U Sports owned team will like to build on that success. However, they will also want a confidence boosting start in Hyderabad before that.

After second leg in Mumbai, U Mumba will travel Panta, Ahmedabad, Chennai, New Delhi, Bengaluru  Kolkata, Pune, Jaipur, Panchkula and Greater Noida. Overall, they will play 22 matches before the playoffs that start from October 14. The final is slated for October 19.

Like last season, U Mumba possess a solid defence, led by the fearless ‘Sultan’ Atrachali. However, the Iranian isn’t the only ace in U Mumba’s ranks. All-rounder Sandeep Narwal, who was bought in this year’ auction for `87 lakhs will be the key. The U Mumba vice-captain leads Pro Kabaddi’s all-time Super Tackles chart. Cover defender Surender Singh, along with Korean defender Young Chang Ko, can contribute for them in defence.

However, U Mumba know they will have to excel in raiding department as well like last season. They can miss a leading man in attack but they have a knack for unleashing outstanding talent like Desai last season.

Rohit Baliyan could assume the mantle of the side’s lead raider, with the support of Korean Dong Geon Lee, who has also proven himself as a capable raider in the past. Abhishek Singh also showed his raiding capabilities last season whenever Desai wasn’t on the field. He is part of the franchise this season also and will be the man to watch out for.

Coached by Sanjeev Kumar Baliyan, U Mumba will want their key players last the entire season to challenge the title which they fell short last time despite promising so much.