Managing injuries will be key

U Mumba vice-captain Sandeep Narwal feels all the teams in PKL are good and fewer injuries will place a team in better position to lift the title. 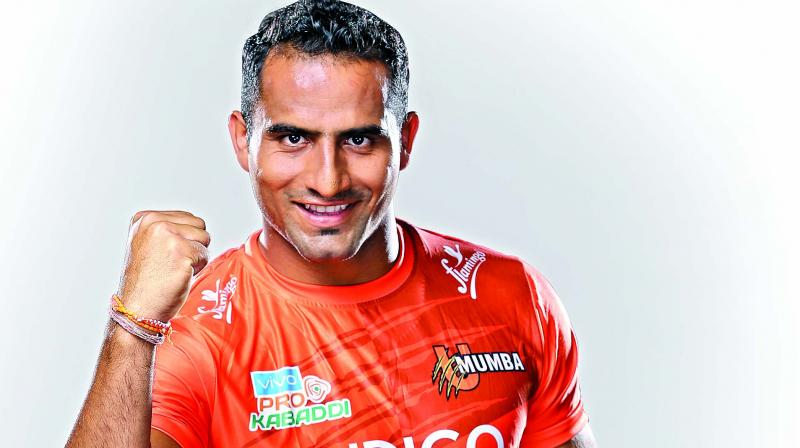 Sandeep Narwal is among the most experienced players in the Pro Kabaddi League franchise U Mumba. The Sonipat born allrounder who started as a defender has developed raiding skills over the years, to give his team ample options. He was the costliest buy for U Mumba in the auction ahead of PKL-7 for 87 lakhs and has been appointed vice-captain of the team led by Iranian defender Fazel Atrachali.

“I am looking forward to play for U Mumbai. We have a good coach (Sanjeev Kumar Balyan) and good bunch of players,” Narwal said.

The former PKL champions had a month long training session in Nashik since June 14. U Mumba coaches drove the camp, while Sandeep and Fazel played the key role in guiding the defensive side. First two weeks were focused on fitness and July onward focus was on skill and team work. During that time they played friendlies as well to assess themselves.

Narwal who was part of the Patna Pirates, won the league in season 3 defeating defending champions U Mumba in the final. U Mumba had won the season 2 title and were finalists in opening season as well before losing to Jaipur Pink Panthers in the final.

Narwal vowed his team would give his best in bid to reclaim the trophy. But he warned all the teams are equal and the team, which has fewer injuries towards the end of the campaign, will go all the way.

“All the teams are equal in this League and every team wants to win the trophy. The team that has less injuries will be better placed will go the distance. We will take it match by match and try to play good and avoid injuries,” he said.

The Haryana player has been in the PKL since inception and though the League has evolved and devising a strategy and implementing it would be key in the tournament. “The use of strategy is very important, in fact more important than just winning. As vice-captain, I want to implement and practice more strategies to gain control on our movements which will eventually help in winning matches,” he said.

Narwal is taking no additional pressure being the second expensive player in the team after Atrachali. “I an under no pressure. I will give my best as a defender and when raiding try to win as many points for the team. I am also guiding youngsters and telling them there is no substitute to hard work,” he said.

The 26-year-old was part of Puneri Paltan for two seasons before moving to U Mumba. “I had good experience with Puneri Paltan. All the franchises are good in the League,” he said.

Narwal was part of the All Star game in Hyderabad on July 13 representing the Indian side while Atrachali led the World 7. “It was great experience. Playing amongst star players from both sides,” he said.

“He is one of the most experienced players and has been a part of PKL since season 1. His experience in the league and otherwise is very beneficial to lead the team and we aim for the leagues top spot this season!” Sen said.