Mega Boxing is being promoted as a blend of sport and entertainment to attract eye balls. 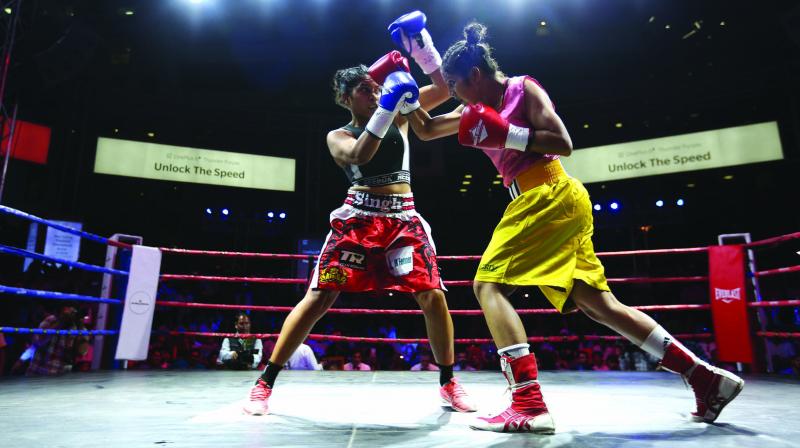 A mish mash of sport and entertainment is lethal and the newly-launched Mega Boxing event at Gurgaon’s DLF CyberHub was a befitting example of that. It was a Vegas-style boxing with male and female fights on the same fight night.

High-intensity boxing bouts embedded with fashion shows, contemporary dance performances and music were a treat to eyes as Mega Boxing concluded its first professional fight night of the year. Brimming with adrenaline, the six fights witnessed knock-outs, rumble, submissions, thrill and even some punches rising towards the sky in excitement.

“It was a Friday evening and everyone was in a party mood and watching Mega Boxing event was the right choice as it had everything - from sport, to dance, to music and fashion show. One can barely ask for more,” a spectator commented, who had come with her husband and five-year-old son.

Shedding light on the occasion, Aditya Gulati, co-promoter of Mega Boxing said, “It brings us immense happiness to see such a successful show and the appreciation we have received from the audience. The air around the arena was electric, oozing waves of thrill and excitement.”

The evening started with a bout between Munish and Gaurav, which was a one-sided affair. Munish reigned supreme as Gaurav longed for medical help as he spitted blood in a filmy style to add more drama to the event.

The other winner of the night were Sagar Narwat, Vikas Singh and Rajesh Kumar while in the women’s category Kirti and Asha Roka took the top spots.

Narwat added, “The sheer amount of love, acknowledgement and appreciation that I have received from the people is tremendous and overwhelmingly motivating. It has not only uplifted my spirit but has made me more focussed towards my ultimate goal. I know exactly where I want to be in this sport and have plans to challenge for a world title fight one day. In the next few months, I’d be able to take on some top-level fighters, including International fighters, for sure.”

The series of one-day boxing shows scattered throughout the year would comprise of a pool of approximately 60 Indian and International boxers, who would compete with each other in an elimination-style set of matches to reach the finale. The finale winners would go and fight in international boxing arenas such as Las Vegas in the US.