The sport runs in his genes as he was born to Mikhail, who won the national championship in the erstwhile Soviet Union in 1982. 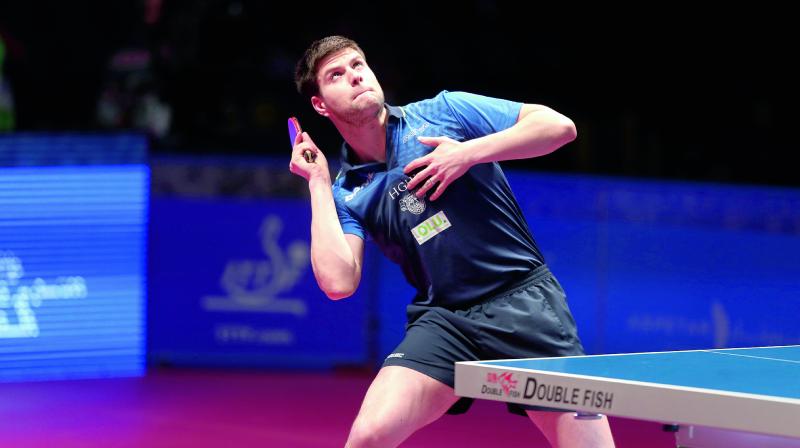 He could be mistaken for a Hollywood star, with sharp features and toned physique, but Germany’s Dimitrij Ovtcharov has chosen to carve out a niche for himself on the table tennis board.

The sport runs in his genes as he was born to Mikhail, who won the national championship in the erstwhile Soviet Union in 1982.

Mikhail moved his family to Germany shortly after Dimitrij was born in order to allow his son to enjoy better facilities to hone his TT skills.

“My father was a former national team player for the Soviet Union and my mother was also a player. I played in the ‘Mini Champs’ programme in Germany in the Under-8 category. Table tennis is my life,” said the 28-year-old.

The world no. 5 was on his second visit to the country, going on to clinch the $15000 ITTF World Tour Indian Open title with élan in the capital recently. But when not on tour he loves to spend time with his family.

“Whenever I get free time from the sport I try to spend it with my baby, wife and parents. My family gives me so much positive energy. Whatever we do, we do together,” he said.

When not playing, the Kiev-born also loves to watch movies at home and is fond of good food and travelling to destination with sunny weather.

“I like meals with my family or friends, talking and laughing together. I like to play pool and darts. Also like swimming in the summer, relaxation in the spa and stuff like that. Driving fast on the highways in Germany is also kind of fun..

“I like the sun and enjoy travelling with my family. We don’t have too much sun Germany so I like to somewhere it is sunny,” added the four-time Olympic table-tennis medallist.

The father-of-one married Swedish table tennis player Jenny Mellström in 2013. They had a daughter, Emma after the Rio Olympics.

“The biggest moment in my life was when my daughter was born. You have to experience this. That was definitely my most incredible moment,” he said.

Ovtcharov is no stranger to the country, having won the India Open just before the 2010 Commonwealth Games in October, when the event was part of the ITTF Pro Tour.

“It is one of the best venues I have played in. More and more events like these should be conducted in India. Personally, I would love to come back,” he said.

For Ovtcharov the day starts early with a session of yoga and apart from physical fitness, he also works on his mental strength.

“I usually wake up at seven in the morning. I do 10 minutes of meditation, some stretching exercises after which I go in for breakfast.

“Then I go for the first practice, then rest then second practice. Sometimes I like to have another fitness session on top. I try to eat healthy. It takes a lot of things to be on the top in all sports,” he said.

Ovtcharov does not idolise any particular athlete, but admires several past and current stars for their extraordinary contribution to their respective sports.

Asked about his philosophy in life, the eight-time European champion said, “I am a perfectionist. I have my routines in life and in sport and I always follow them. But I am also a funny guy. I like to joke a lot and have some fun with my friends to reduce stress.”