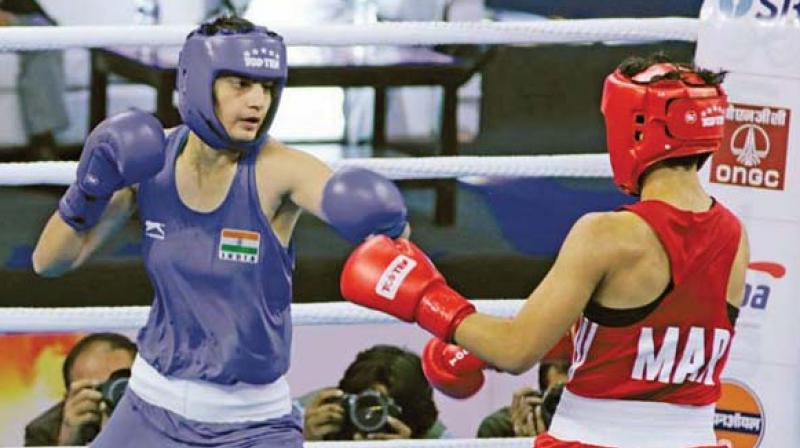 New Delhi: The win of featherweight boxer Sonia on her debut set the tone of Day Three for the hosts at the 10th AIBA Women’s World Boxing Championships here on Saturday.

The Haryana girl demonstrated a defensive approach to outclass her Moroccan rival Toujani Doaa with a unanimous decision (5:0) to enter the 57kg pre-quarterfinals at the KD Jhadav Hall.

“I was confident as I picked up rhythm in the second as advised by my coach. I was moving nicely and landing some quick punches. I simply followed the same tactics in the third,” said Pinki.

In the morning session, Sonia showed no sign of nervousness despite being a rookie in her first bout at the Worlds and came in with all cylinders firing in the opening round. Using her right hook to the fullest and accompanying it with occasional left and right, the 21-year-old clinched the crucial points.

The second round was also a close affair with both exchanged a flurry of blows. Sonia landed a left punch right on Doaa’s face. Sonia soon received a jab but she answered back with another one as the Moroccan girl was seen clueless and exhausted.

In the third round both boxers were more cautious and Sonia started maintaining distance. The clenches were going out of control as they fell to floor again and again but Sonia landed a few clean shots on the rival’s face to gather enough points to emerge victorious.

“I began boxing in 2011 (at the school level) and this is my first major international event and I am happy to win this bout. It was a tough fight. My style is basically defensive and I stuck to it. My coaches told me to play from a distance, draw her in and punch. That I did,” Sonia said after her bout.

“I knew I had to maintain my distance and go close only to find openings. I was successful on a few occasions in the first two rounds. But in the third, I went attacking and used my combination punches,” said Sonia, who will face 2014 World Championships gold medallist Stanimira Petrova of Bulgaria on Monday.