The Jamaica-born legend was here as a face of footwear giants Puma for the Airtel Delhi Half Marathon and said he always enjoyed coming to India. 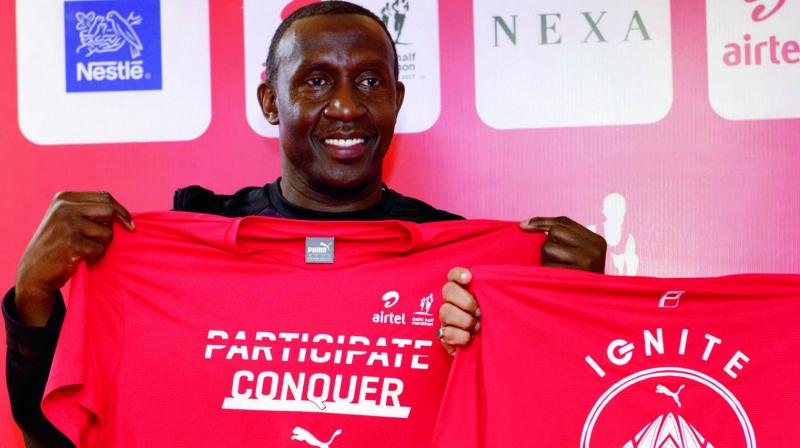 “Send them (Indian athletes) to train abroad under experienced coaches and you will see the results. It will not change in a fortnight but one day they will succeed. One should not lose hope... should try and try till they succeed,” Christie told this paper here on Friday.

In an international career spanning 17 years, Christie won 23 major championship medals for Great Britain and also became the only British athlete to win gold medals in the 100 metres at all four major competitions — the Olympics, world championships, Commonwealth Games and European Championships. He was the first European to clock a sub-10 second time.

The Jamaica-born legend was here as a face of footwear giants Puma for the Airtel Delhi Half Marathon and said he always enjoyed coming to India.

“I know pollution is there but what’s important is to get people out. What they do otherwise sitting at home. Sit at home and vegetate? It’s great to be back again in India,” the 57 year old said.

‘Difficult to find Bolt’s replacement’
Usain Bolt and Mo Farah having retired, Christie felt the world of athletics would take time to find successors. He felt the sport had made a mistake by hailing Bolt and Farah as its face and not identifying whom the baton could be passed to.

“In my time, the field was wide open. But Bolt completely dominated the track and this will not happen again for a long time. You need a star. It is good for our sport to have a star and Bolt was good for athletics.

“Bolt and Mo were projected as the only stars and they (the international athletics federation) should have groomed others also to become stars after them. Since that was not done, it will take some time, may be a couple of years to find stars,” he added.

Asked about his biggest career achievement, Christie said the 1993 World Championships was his fondest memory.

“I enjoyed the 1993 Worlds the most. It was the toughest race of my career. Many considered I won the 1992 Olympics gold medal because Carl Lewis wasn’t there so I had to prove that it wasn’t a fluke at the 1993 Worlds,” Christie recalled.